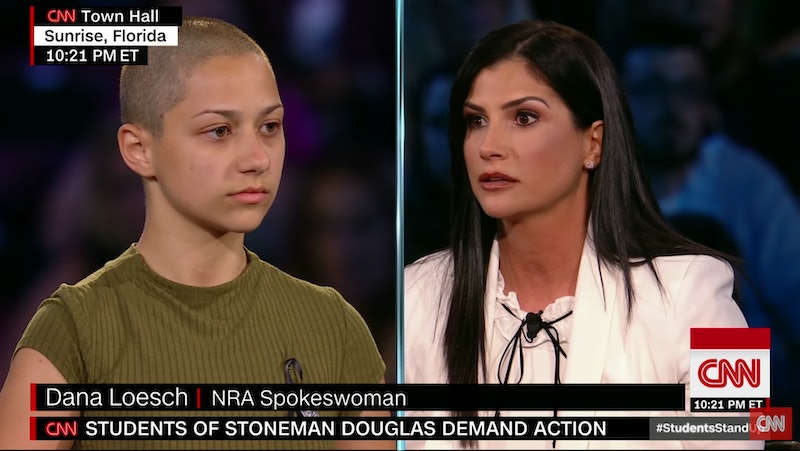 During CNN's town hall event Wednesday, student survivors of the Parkland shooting spoke forcefully and without apology about the need for change to America's gun laws. And the transcript of Emma Gonzalez's discussion with NRA rep Dana Loesch showcased just how willing these young people are to call out the evasions and talking points that usually get a pass in political debate forums.

Gonzalez' original question asked Loesch if she — and, by extension, the NRA — would support making automatic and semi-automatic weapons more difficult to obtain, along with accessories like bump stocks that make guns even more efficient at killing. Loesch didn't really answer the question. So Gonzalez stopped her and simply repeated her original question.

In recent weeks, students have emerged as perhaps the most powerful force advocating for gun control measures in at least a generation. From high school walkouts across the nation to a "die-in" protest in front of the White House, teenagers are politically engaging en masse on the issue of gun regulation. And their efforts seem to be affecting actual consideration of gun control reform amongst politicians, even in a state as pro-gun as Florida.

Gonzalez is on the forefront of the youth-led drive for action. Below is a transcript of her town hall confrontation with Loesch.

EMMA GONZALEZ: First of all, I want to thank Mr. Foster for teaching us everything we learned. I could not have written that speech without you. Half of you was like directly from notes and I want to thank you for that. Second of all, oh, I had a thing I was going to say. Happens to the best of us. All right. Dana Loesch, I want you to know that we will support your two children in the way that we will not— you will not.

The shooter at our school obtained weapons that he used on us legally. Do you believe that it should be harder to obtain the semi-automatic and— weapons and the modifications for these weapons to make them fully automatic like bump stocks?

DANA LOESCH: Well, first off, Emma, I want to applaud you for standing up and speaking out. And for anyone who has ever criticized you, or any of these students up here, including people who have been on my side of this issue, I don't think that anyone should deny you your voice or deny you your position because you are young.

GONZALEZ: I want to thank you for that.

LOESCH: I was a very politically active teenager and I'm on this stage as a result of that. Think of how far you all could go, as a result of voicing your beliefs.

Now, I want to answer your question. And, I want to be allowed the opportunity, which is why I am here. To talk and have this discussion with you all and answer these questions. This is why I came down here.

I don't believe that this insane monster should have ever been able to obtain a firearm, ever. I do not think that he should have gotten his hands on any kind of weapon. That's number one.

This individual was nuts and I, nor the millions of people that I represent as a part of this organization, that I'm here speaking for, none of us support people who are crazy, who are a danger to themselves, who are a danger to others, getting their hands on a firearm.

Because I don't want anyone to ever be in this position again. I want everyone to think about this for one second, and this goes right into your question. Do you know that it is not federally required for states to actually report people who are prohibited possessors, crazy people, people who are murderers?

GONZALEZ: You guys, if I can't hear her statement, I can't come up with a rebuttal. Please.

LOESCH: Wait a second! Do you guys want to stop mentally insane individuals from getting firearms. Yes? They have to be in this system. If they are convicted. You can convict them, you can adjudicate the mentally unfit. If a state does not report it to the National Crime Information Center, when you run that form, this individual— this madman passed a background check.

GONZALEZ: I think I'm gonna interrupt you real quick and remind you that the question is actually, do you believe it should be harder to obtain these semi-automatic weapons and modifications to make them fully automatic, such as bump stocks?

LOESCH: Well, I think the ATF is deciding about bump stocks right now. The president ordered the DOJ to look into it.

GONZALEZ: I'm asking your opinion, as a representative of the NRA.

LOESCH: That's what the NRA's position has been. The NRA came...

You're not standing up for them, until you say I want less weapons.

These people want three things. And I come here tonight with 39 years in law enforcement. I Baker Acted people, I've taken weapons from people. The men and women I've worked with for almost 40 years, we know how to keep America safe.

We should be able to take them to an institution that's going to examine them and take weapons away from them, right then and there, at that time.

The crowd was vocally on the side of Gonzalez throughout her exchange with Loesch. And if the Parkland students are any indication of young people's views nationwide, the possibility of gun control legislation both now and in the future looks very strong.