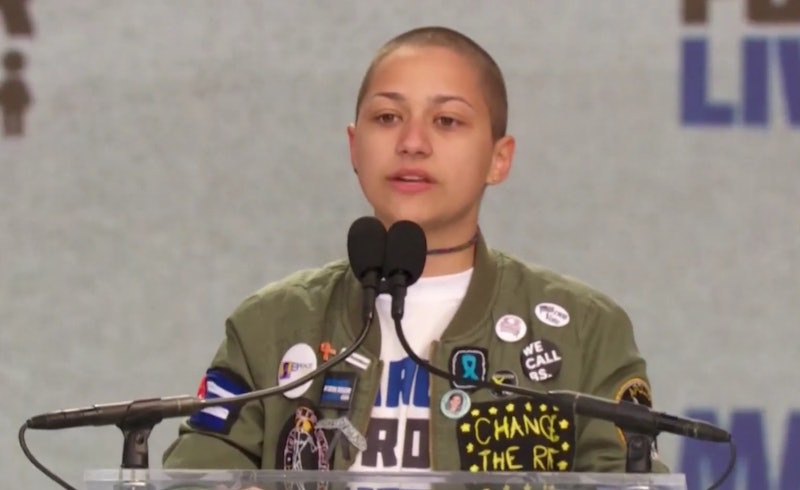 On Saturday, March 24, hundreds of thousands of demonstrators turned out for the March For Our Lives, a massive public protest in support of gun control. And those who did bore witness to a deeply emotional and powerful speech by Emma González, a survivor of the Stoneman Douglas High School shooting. Perhaps the strongest and most evocative part of her speech, however, came not through her words, but through her silence.

Halting her speech after naming and describing the people slain in the shooting, González fell silent for six minutes and 20 seconds, the same amount of time it took for the gunman's assault to come to an end. During the protracted silence, the assembled crowd joined her in silence, occasionally shouting words of support and chanting "never again!"

If you can't actually watch the video of the deeply moving speech, you can read what she said instead; here's what Gonzalez told the assembled crowd.

Six minutes, and about 20 seconds. In a little over six minutes, 17 of our friends were taken from us, 15 more were injured, and everyone, absolutely everyone in the Douglas community was forever altered. Everyone who was there understands. Everyone who has been touched by the cold grip of gun violence understands. For us, long, tearful, chaotic hours in the scorching afternoon sun were spent not knowing.

No one understood the extent of what had happened. No one could believe that there wer bodies in that building waiting to be identified for over a day. No one knew that the people who were missing had stopped breathing long before any of us had even known that a code red had been called. No one could comprehend the devastating aftermath, or how far this would reach, or where this would go.

It was then that Gonzalez fell silent, only speaking once more after a time beeped, telling her it had been six minutes and 20 seconds since she'd taken the stage. The silence was extremely evocative, and isn't done justice by the transcript ― you can watch it in the video embedded below.

Once the time had elapsed, Gonzalez explained why she'd fallen silent, and implored the marchers to fight for their lives.

"Since the time that I came out here, it has been six minutes and 20 seconds," she said. "The shooter has ceased shooting, and will soon abandon his rifle, blend in with the students as they escape, and walk free for an hour before arrest. Fight for your lives before it's someone else's job."

Gonzalez was the last speaker at the rally, and she definitely left a mark, with TV cameras showing some people in tears as they listened to her words. It remains to be seen how much impact the March For Our Lives might have on the American political process, but as far as its participants are concerned, it's clearly been a very powerful and heartfelt experience.