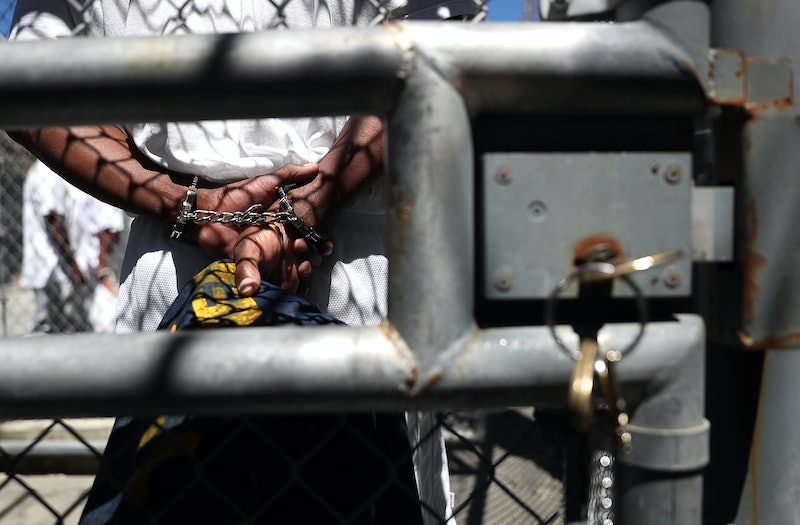 The Trump administration has decided to roll back an Obama-era protection for transgender inmates that was specifically designed to keep them safe from unnecessary sexual or physical harassment in prison. The Trump administration's new rules for transgender prisoner rights stipulate that inmates should be housed based on their biological sex, not their chosen gender, as the "initial determination". Now, it could be close to impossible for a transgender person to be housed according to the gender they've chosen.

According to the official change notice for the "Transgender Offender Manual", which was updated on May 11, the Transgender Executive Council (TEC), a branch of the Federal Bureau of Prisons, will no longer be required to consider housing an inmate based upon their gender identity. Instead, the TEC will use the inmate's biological sex as a main factor, along with "factors specific to the transgender inmate, such as behavioral history, overall demeanor, and likely interactions with other inmates." The Federal Bureau of Prisons told Buzzfeed News, "We decline to comment further."

This abrupt rollback of a very intentional stipulation by the Obama administration could seriously weaken transgender inmates' rights. Prioritizing a transgender person's biological sex over their chosen gender identity can be dangerous in any scenario, let alone in a scenario that involves incarceration.

Given all of the advancements for transgender and LGBT people that have been made in the United States in recent years, the administration's latest decision represents a step backwards. But that's not the only problem that this manual poses. Given that the intention of the Obama administration was to protect transgender inmates from physical and sexual abuse, this reversal of the rule may now expose them to that very outcome.

Another concerning aspect of the rule changes is the inability of the Trump administration to define what it means, exactly, by "biological sex." Even though someone's biological sex might seem like a straight answer, it's really not. In fact, it could be determined, defined, and ultimately contradicted by a series of factors, BuzzFeed News reports. These factors including a person's birth certificate, chromosomal makeup, or physical anatomy and appearance.

ACLU attorney Chase Strangio, who represents transgender inmates, explained to Buzzfeed News why he thinks this is such a cart-before-the-horse move by the Trump administration. “Creating an entire policy around the concept of ‘biological sex’ but not including a definition of the term," he explained, "serves the misleading and false suggestion that one’s ‘biological sex’ is somehow self-evident.”

Strangio also claimed that these new rules technically violate the Prison Rape Elimination Act, which includes a rule that requires officers to consider the gender identity of a transgender person while deciding where to house them.

The National Center for Transgender Equality has labeled the Trump administration the "Discrimination Administration" for the series of anti-transgender and anti-LGBT actions it's taken since Trump took office (you can find a full list of these actions on their website).

As seen above in Laverne Cox's tweet, anyone looking to reverse this new stipulation can sign a petition demanding the Trump administration reinstate the Obama-era protections for transgender inmates.