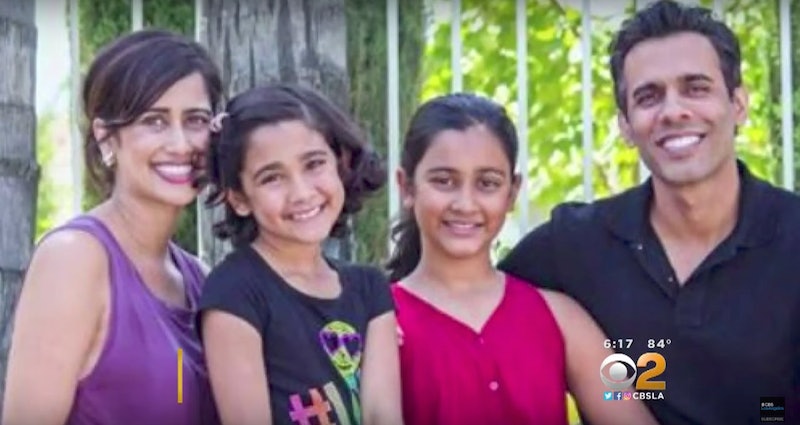 On Aug. 2 alongside her parents, 8-year-old Nicole Brar, a transgender student in Orange County, took a strong stand against discrimination. Last week, her parents filed a lawsuit against Brar's private Orange County School for refusing to recognize her gender and for inflicting emotional distress, among other things. While Brar, a minor, could have chosen to remain anonymous in the lawsuit, according to the Los Angeles Times, she wanted to let people know exactly who she is.

The lawsuit, filed last week by Nicole's parents, Priya Shah and Jaspret Brar, alleges that Heritage Oak Private Education would not use her female name or pronoun and refused to let her use the girls' restroom or wear the girls' uniform. According to the Los Angeles Times, the family is arguing that the school violated the Unruh Civil Rights Act of California that makes discrimination of sex or sexual orientation illegal. They are also claiming that the school falsely advertised that it was non-discriminatory, and that it intentionally inflicted emotional distress.

The legal filing's introduction paints a heart-rending picture of what that emotional distress looked like for Brar.

As a result of Heritage Oak and Nobel Learning Communities’ intentional discrimination, Nikki has suffered and will foreseeably continue to suffer severe emotional distress. Seven-year-old Nikki became depressed and talked about self-harm; she isolated herself socially and would not play with other children at recess because she could not be herself with them; she would not participate in school-related events after hours when she had to wear boy’s clothes; and she felt that the school was blocking her “inner light.” On the day when she tore a photograph of herself in half and cried out, “I hate myself,” Nikki’s parents had no choice but to remove her from the school and homeschool her for the rest of the year.

In response to the lawsuit, Heritage Oaks released a statement.

We strive to meet the needs and well-being of all children in our schools and have been able to accommodate the needs of other transgender students in older grades at Nobel Learning Community schools without incident.

We were mindful in this instance of the need to support not just this 7-year-old [now 8], but other young children. We believed it was extremely important to respond, not hastily, but with deliberate care, to decide when and how to inform and educate our entire elementary school community of students, staff and parents about the mid-year change of gender identity expression of a young child. Due to the sensitivity of the issue and age of the child, we believed we needed expert guidance regarding timing (such as, preparing children for a change they would see in spring semester of second grade and fall semester of third grade), process and age-appropriate communication.

We told the family we had decided to retain an outside consultant to assist us, and we were communicating with the family on a consistent basis to discuss potential experts and specific accommodations (in addition to the other accommodations we had already offered, such as use of the single-unit staff bathroom, specific options as to girl’s uniform clothing and girl’s hairstyle, as well as ceasing to use gender groupings in physical education activities). Unfortunately, these accommodations were rejected and the parents withdrew their child.

She has since started homeschooling and will be joining a public school in the fall for the new school year.