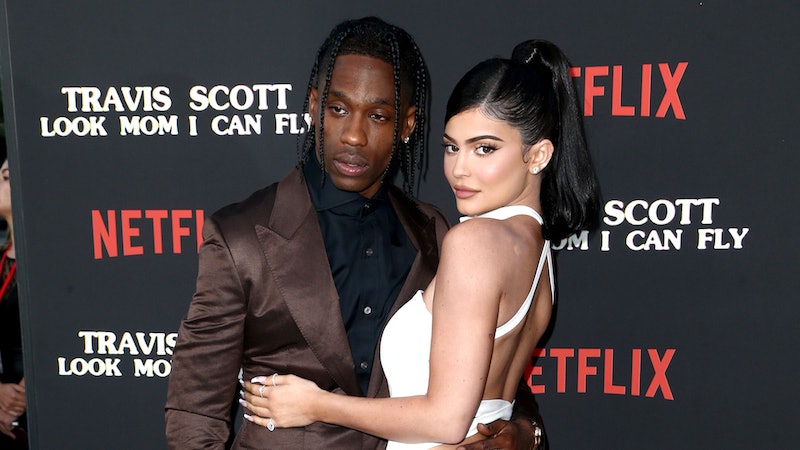 In a new Instagram Story shared on Oct. 4, Travis Scott addressed rumors that he cheated on Kylie Jenner. His social media post comes on the heels of Oct. 1 reports that Scott and Jenner are “taking a break” from their relationship after nearly two years of dating. Scott wrote on Instagram Story, “It’s really affecting when u see false things said about u once again these false stories about me cheating are just simply not true. Focusing on life, music, family at this moment is what's real."

Shortly after the news of their split broke, tabloids reported that Scott had been unfaithful to Jenner with a woman named Rojean Kar. On Oct. 3, she denied the rumors in a now-deleted Instagram Story, as per Refinery29. "None of these rumors are true," she reportedly wrote at the time. "It's just the internet creating a false narrative. Please stop spreading lies and leave him, her & I alone because it's affecting real lives. Thank you."

Prior to Scott’s Instagram Story, Kylie and the rapper have not spoken publicly about the cheating rumors. (Bustle reached out to Kylie and Scott's reps for comment at the time of their split, but has not yet received a response.) TMZ first broke the news of the couple’s split on Oct. 1, and the website noted that they haven’t “been together publicly” since the premiere of Scott’s documentary Look Mom, I Can Fly in Santa Monica, California, on Aug. 27.

On Twitter on Oct. 3, however, Jenner addressed the split and rumors that she had a tweet. “Travis and i are on great terms and our main focus right now is Stormi,” she wrote. “our friendship and our daughter is priority.”

During that time, Jenner also denied reports that she had gone on a date with her ex Tyga amid her split from Scott. The rumors circulated after Jenner’s close friends were spotted leaving Tyga’s studio early on Oct. 3, as per People. “The internet makes everything 100 times more dramatic than what it really is,” Jenner tweeted after the rumors circulated later that day. “There was no ‘2am date with Tyga.’ You see me drop two of my friends off at a studio that he happened to be at.”

A source attempted to squash all romance rumors between Jenner and her ex in an Oct. 3 People exclusive. “There is really no reason to believe that Kylie is interested in any more with Tyga,” the source told the publication. “She isn’t totally finished with Travis and it does seem she hopes they can somehow find a spark again. She is definitely in no rush to date again.”

Scott and Jenner have been romantically linked since they were spotted at Coachella together in April 2017. The two welcomed daughter Stormi in February 2018. The couple faced cheating rumors in February 2019, when Scott postponed a Buffalo, NY, concert. It was rumored that Kylie had reportedly accused him of cheating and Scott reportedly postponed the concert to return to her in Los Angeles, according to Entertainment Tonight. Scott's rep told the outlet, "Travis Scott vehemently denies he cheated on Kylie. It is not true. He did not cheat. He cancelled one show tonight because he is under the weather."

Kylie and Scott have addressed the rumors surrounding their split and it seems like their focus seems to have resumed on baby Stormi.

More like this
Kylie Jenner Clarified How To Pronounce Her Son's New Name
By Jake Viswanath
Kim Kardashian & Kylie Jenner Squabble Over Skims On Instagram
By Alyssa Lapid
Jameela Jamil Defends Sam Smith After Trolls Body-Shamed Them
By Jake Viswanath
Britney Spears Shared The Real Reason She Shut Down Her Instagram Account
By Brad Witter
Get Even More From Bustle — Sign Up For The Newsletter
From hair trends to relationship advice, our daily newsletter has everything you need to sound like a person who’s on TikTok, even if you aren’t.