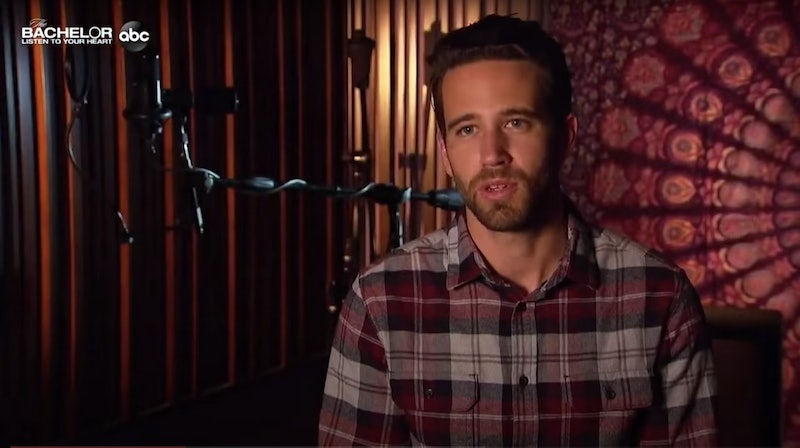 If you're bored in quarantine and craving new Bachelor content, good news: there's a new musical spinoff premiering April 13. The show, titled The Bachelor Presents: Listen to Your Heart, will bring together 20 singles in the hopes of helping them find love through music. That includes new Bachelor star Trevor Holmes, a country pop singer from Encino, California. Learn more about him below.

Who Is Trevor Holmes?

Trevor is a part-time musician living in California, working a 9-to-5 daily but playing gigs and writing music in L.A at night, per ABC. Music isn't the reality star's only hobby: he was a semi-pro hockey player, and is now an "avid surfer." He's also a dog lover, and called his golden retriever Koda his "best friend." This won't be the musician's first run on reality television either - in 2018, Trevor made it to top 25 on American Idol, but is hoping to get a little further on The Bachelor.

What Kind Of Music Does Trevor Make?

A self-proclaimed "country pop" singer-songwriter. He's shared some of his original music online — most recently an in-progress track called "Better to You" but has also posted covers like "The Night We Met" by Lord Huron on YouTube. Trevor sang "Home" by Phillip Phillips for his American Idol audition, and seems to have predominately folk and country influences.

Trevor's Instagram suggests he's a pretty average guy. He enjoys going for walks with his dog and surfing the California waves. He also has experience collaborating with other musicians, which will serve him well on Bachelor: Listen To Your Heart.

The American Idol judges enjoyed Trevor's performance, and though they urged him to show more emotion, the panel ultimately selected the singer to move forward. Before performing, Trevor revealed that he's working in construction to support his mother, who was diagnosed with Lupus. "I'm a part-time songwriter, part-time construction worker," he said. "I want to be a full-time musician but sometimes you got to pay the bills." Katy Perry, in the particular, was a big fan of Trevor. "He's hot," she said. "He does construction on the side, and he loves his mom."

On American Idol, Trevor said he had a girlfriend, but the two have apparently split in the two years since. Now, he's single and ready to find someone new on the Bachelor.

More like this
The Bachelor’s Christina Mandrell Comes From One Of Country Music’s Most Famous Families
By Brad Witter
This 'Bachelor' Contestant Had The Best Reaction To Wearing The Same Dress As Another Woman
By Grace Wehniainen
The Bachelor’s Greer Blitzer Apologized For “Uneducated, Ignorant” Past Tweets
By Brad Witter
Brooklyn From 'The Bachelor' May Have Accidentally Predicted Her Time On The Show On IG
By Grace Wehniainen
Get Even More From Bustle — Sign Up For The Newsletter
From hair trends to relationship advice, our daily newsletter has everything you need to sound like a person who’s on TikTok, even if you aren’t.