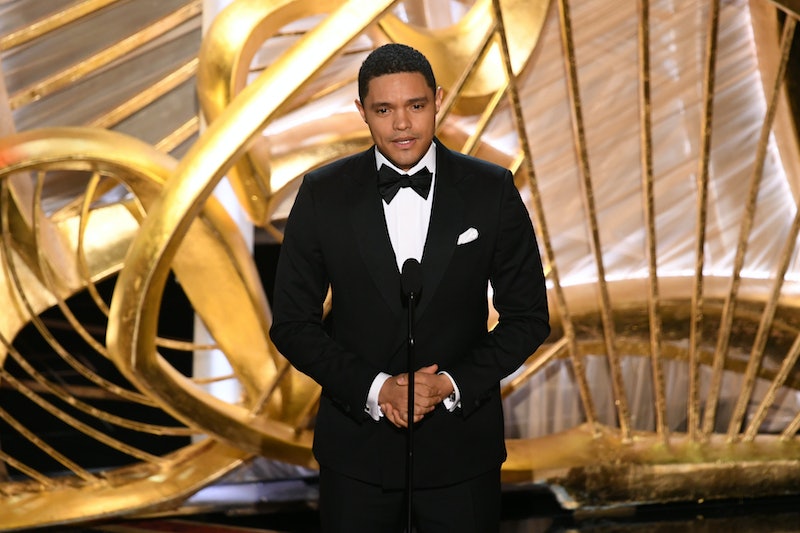 With no host for the 2019 Oscars, the awards show relied on their very talented presenters and interspersed musical moments to move the ceremony along. And the ceremony did seem to go off without a hitch, with comedians providing some much needed laughs along the way. But while viewers gushed over Amy Poehler, Tina Fey, and Maya Rudolph's non-hosting Oscar opening monologue, it was actually Trevor Noah who had the best Oscars joke of the night — but not everyone understood it.

While presenting one of the Best Picture nominees for the night, Black Panther, Noah, who is from South Africa, told the audience how the movie has impacted his life. He joked that not only do his African friends say "Wakanda Forever" to him, but so do random people across the globe. He also got in a jab at Mel Gibson. But even that relatively daring joke wasn't the best part of his speech.

"Growing up as a young boy in Wakanda, I would see T'Challa flying over our village," Noah joked. "And he would remind me of a great Xhosa phrase. He says 'abelungu abazi uba ndiyaxoka,' which means, 'In times like these, we are stronger when we fight together than when we try to fight apart.'" It's a beautiful sentiment that didn't really cause any big laughs from the audience. But it turns out, that's not actually what the phrase translated to. Instead, according to CNN, what Noah actually told the audience was, "White people don't know I'm lying," which means that he gave the best joke of the night, and most of the American audience didn't even know it.

Many people on Twitter who actually speak the language caught on rather quickly, and educated others on the fact that were being trolled by Noah. According to NPR, it even sparked a trending hashtag, #KodwaAbayaziNdiyaXoka, the part of the phrase that means "but they don't know that I'm lying," where users in South Africa wrote obvious lies accompanied by the tag. And of course, those that were in on the joke couldn't help but share their excitement about it on Twitter.

Xhosa is one of the official languages of South Africa, according to Omniglot, and comes from the people of the same name who are located in the Eastern Cape Province. They're related to Zulu, are the second largest ethnic group in South Africa, and the language is spoken by about 8.3 million people, according to a South African tourism website, SA-Venues.

Clearly, Noah didn't just want to be in the room where it happens, he wanted to put his own twist on it, as he did with his expertly delivered joke. Whether you caught the joke at the time or not, it's hard not to see how clever it was. And hopefully he sneaks some more in (where relevant) if he presents again.