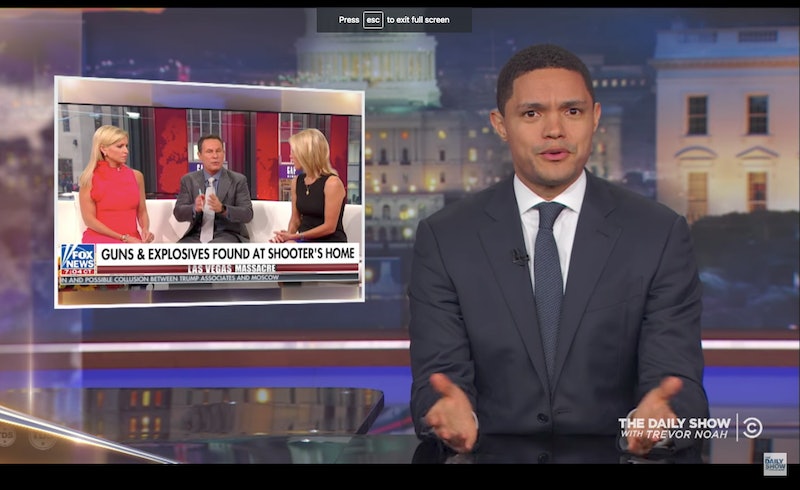 The Daily Show With Trevor Noah
By Sarah Friedmann
Oct. 4, 2017

On Tuesday's episode of The Daily Show, host Trevor Noah called out the hypocrisy of Fox News saying that talking about gun control after the shooting in Las Vegas is "politicizing" a tragedy. But many gun control activists are asking if now is not a good time, then when?

Noah particularly took issue with several Fox News anchors, who spent much of Monday calling for a period of mourning post-Vegas before discussing the issue of gun control. Noah called the hosts out on their rhetoric, saying that he believes it is pretty clear that there is not any time that Republicans would be willing to talk about gun control — and that waiting several days post-Vegas to do so does not make it any more likely that they will be willing to discuss the issue.

Moreover, Noah also took Fox News anchors to task for the apparent hypocrisy behind their request to allow for a period of mourning post-Vegas. As Noah pointed out, immediately following the Pulse Nightclub shooting in Orlando last year, Fox New anchors were "politicizing" the issue, questioning whether stricter immigration laws should have been in place to potentially prevent the attack. Noah then played a clip of Fox Anchor Brit Hume saying, in reference to the attacker in the Orlando shooting, “You wonder whether people like that should be coming here."

Noah then proceeded to condemn Fox News for attempting to politicize the tragedy in its own way — by reminding viewers that law enforcement officials helped save lives in the Vegas shooting and asserting that those who choose to kneel for the national anthem during NFL games should be cognizant of this fact. Indeed, Noah played a clip of Fox News anchor Jesse Watters saying, “So all those kneelers in the NFL out there, they need to recognize when they’re kneeling during the anthem, they’re kneeling, and we’re supposed to be honoring law enforcement— law enforcement that’s trying to save lives, not take lives.”

The Daily Show host appeared aghast at the Fox reference to the NFL protests as the anchors discussed the Vegas shooting, saying, "Wow, did this guy just find a way to use the mass shooting to pivot back to the NFL argument ... Yeah, like, after watching this, you would be thinking, hundreds of people shot in Las Vegas, Colin Kaepernick you son of a b*tch!”

Noah continued to chastise Fox anchors for what he believes has appeared as a desperate struggle to find a narrative for the Vegas shooting — narratives which sometimes the anchors don't even believe themselves. For example, Noah played a clip of one anchor suggesting the Las Vegas shooter may have targeted a country music festival because "country music fans are normally pro-God and go to church on Sundays ... maybe he [the shooter] has a problem with that ..." The anchor's suggestion was then met with silence and apparent confusion from her two co-anchors.

The Daily Show segment then wrapped up with Noah mocking anchor Sean Hannity's assertion that he and other gun owners somehow could have stood a chance and taken down the Las Vegas attacker if the circumstances had been slightly different. Noah then ended the clip by advertising a fake Sean Hannity security service, poking fun at the anchor for his statements about his supposed abilities to protect the public.

Overall, Noah certainly believes that Fox anchors really missed the mark this week when it came to coverage of the Las Vegas shooting — both with their seemingly hypocritical cries not to politicize the tragedy and their simultaneous attempts to create a narrative to explain the shooting.