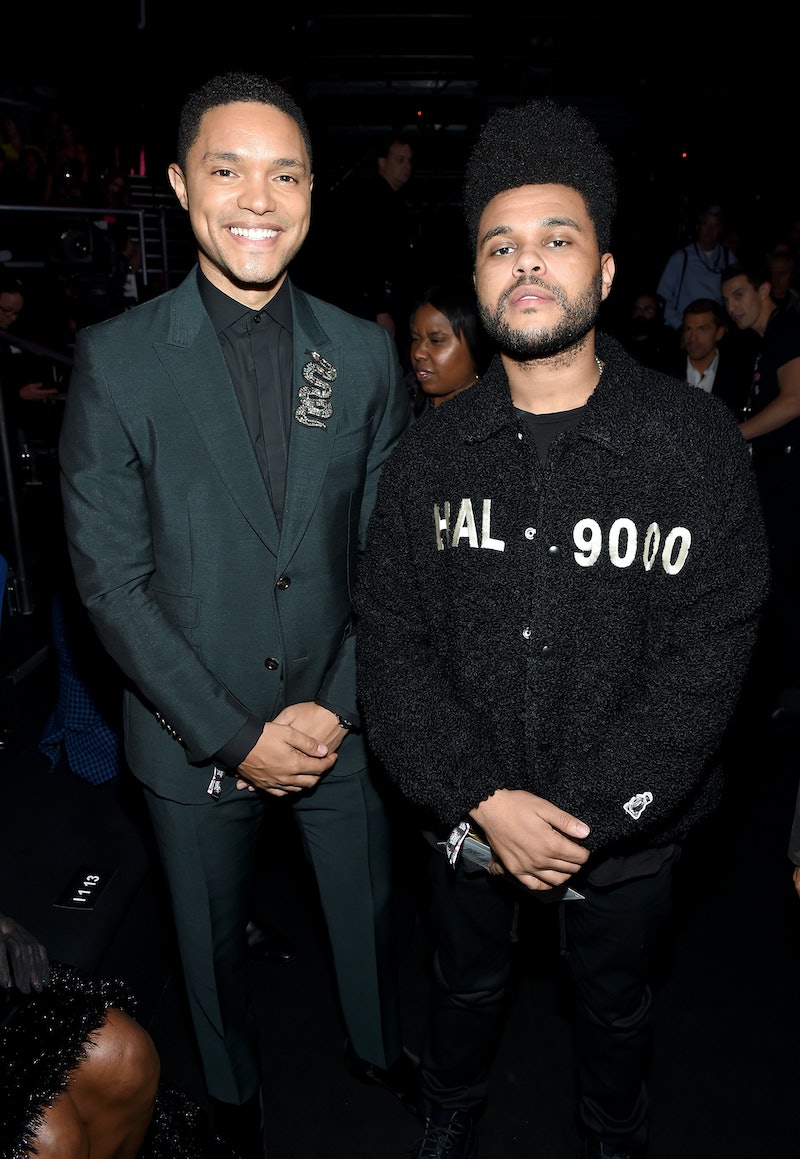 Seeing double? Nope, that's just Trevor Noah and The Weeknd, who are basically twins when they stand next to each other. Late Thursday on Nov. 8, The Weeknd posted a photo of himself and Trevor Noah together to show off the uncanny resemblance between the two stars. But the best part about the IG post may just be the fun comments Noah and The Weeknd's girlfriend Bella Hadid left.

The "Starboy" singer captioned the post — which featured the pair standing next to each other at the Victoria's Secret Fashion Show, as well as individual photos of Noah and The Weeknd (with short hair) — "real life twin @trevornoah." When you click through to see the singer with short hair, it really brings home their lookalike status. I mean, seriously, did they do some kind of face-swap editing here or something? This is truly taking twinning to a whole other level.

It's safe to say that Noah agreed (because, obviously). Of course, he joked about the similarities by posting a fun Instagram comment on The Weeknd's post. The Daily Show host wrote, along with a laughing emoji, "If I ever commit a crime you're going down!" Similarly, Hadid also took the comments section to share her feelings about her boyfriend twinning with Noah. She wrote, simply, "omfg." That pretty much sums it up though, doesn't it?

Twitter users were equally shocked by the similarities between the two celebs.

One person wrote that the men are basically "the same person." And, honestly, where's the lie?

Another user wrote, "The Weeknd is on Instagram twinning with Trevor Noah and I just" along with a bunch of emojis. Yep, that sounds about right.

This Twitter user really hit the nail on the head when they said that Noah and The Weeknd are doppelgängers (in other words, they're identical).

Before The Weeknd pointed out their lookalike status, there were many on Twitter who beat him to the punch and highlighted the similarities long ago.

In May 2017, one Twitter user wrote, "Trevor Noah and The Weeknd are the same person until I see them on stage next to each other. Don't @ me!" They do look so much alike, after all.

Another user shared some of their "deep thoughts" on the twinning matter back in March 2016. They joked, "has anyone ever seen Trevor Noah and The Weeknd in the same place?"

Even Noah's In On It

Interestingly enough, Noah even acknowledged how much he looks like The Weeknd way back in September of 2015. Upon the release of the singer's Beauty Behind The Madness album, the Daily Show host decided to have a little fun. "Don't forget to buy my new album. It's called "The Weeknd - Beauty behind the madness" (yes I cut my hair for tv)." So, Noah knew back in 2015 that he could pass as the musical artist.

And now, based on The Weeknd's recent photo of the "twins," it appears that everyone's in on the fun joke.