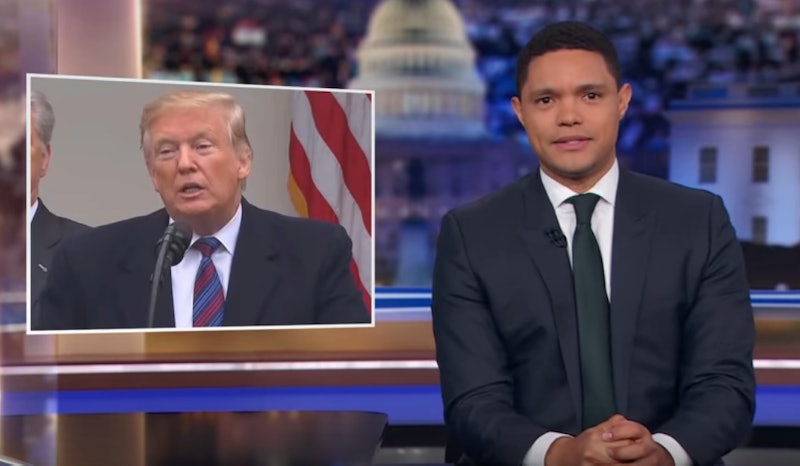 The Daily Show with Trevor Noah/YouTube
By Caroline Burke
Jan. 10, 2019

On Jan. 8., Daily Show host Trevor Noah's national emergency segment was all about Trump's border wall — but there was a surprising twist to his monologue. Noah first acknowledged Trump's recent claim that he might declare illegal immigration to be a national emergency. He then made the argument that Democrats might just want to give Trump his border wall, instead.

"Presidents declare national emergencies all the time," Noah concluded. "What they don't do is declare an emergency just to win a policy fight with Congress." Noah went on to explain that Trump did have the constitutional right to declare a national emergency. Then he did something unexpected, suggesting,

If I'm the Democrats, I would give Trump the wall before he finds out what he can really do ... right now he's like the baby from The Incredibles, right? He only knows that he can float. We do not want him finding out that he can shoot lasers from his eyes.

Earlier in his monologue, Noah pointed out some of the dangers that might come of Trump's knowledge that he could declare a national emergency. He said,

It’s one thing to freeze our bank accounts or send troops to our houses, but shutting down communications? That means Trump could turn off the internet? Like Instagram? How am I supposed to get sponsorships now?

Though Trump has floated the idea of declaring a national emergency, he hasn't acted on it thus far. CNN notes that there is still no end in sight for the government shutdown, 18 days in. Additionally, Trump left a White House meeting with Democrat lawmakers on Wednesday after another failed attempt at a resolution.

Following the meeting, Trump took to Twitter to call the meeting a "waste of time," writing, "I asked [Nancy Pelosi and Chuck Schumer] what is going to happen in 30 days if I quickly open things up, are you going to approve Border Security which includes a Wall or Steel Barrier? Nancy said, NO. I said bye-bye, nothing else works!"

Even GOP lawmakers have begun to publicly voice their concerns over Trump's threats of a national emergency declaration. Sen. Rob Portman of Ohio said to CNN, "It's a much wiser idea to negotiate something out, because if it's done it will be tied up in the courts for a long time, and it would not be successful in achieving the objective. Plus it's cumbersome."

On the other side of the partisan aisle, Sen. Dick Durbin argued that the president would face a "challenge" if he did try to circumvent Congress with a national emergency declaration. On CBS' Face the Nation on Sunday via CNN, Durbin said, "He's faced so many lawsuits when he ignores the law and ignores tradition and precedent and just goes forward without any concern."

Durbin continued, "He'll face a challenge, I'm sure, if he's oversteps what the law requires when it comes to his responsibility as commander in chief."