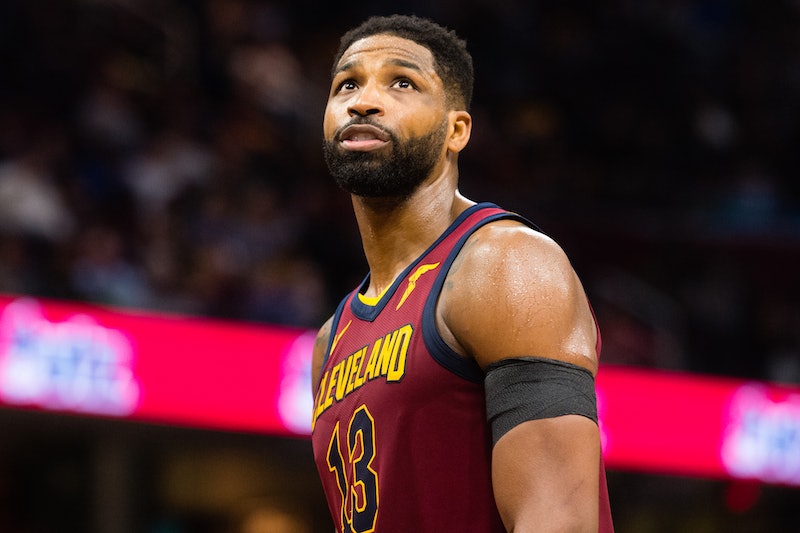 Allie Clifton and Richard Jefferson, hosts of the basketball podcast Road Trippin, had the chance to chat with Tristan Thompson, who gushed about his daughter True — the baby he and girlfriend Khloe Kardashian welcomed on April 12. The Cleveland Cavaliers power forward had some cute comments to say about baby True, discussing the newborn for the first time since rumors surfaced in April accusing Thompson of cheating on Khloe. (Both Thompson and Kardashian have remained silent on the topic and Bustle has reached out.)

Although there are no pictures yet of baby True, Thompson seemed happy to describe his daughter's appearance and current life. “Baby True is eating, sleeping and, sh*tting,” he said on the podcast. “That’s all they do.” Regarding her looks, Thompson revealed, “She has a full head of hair. She has green eyes. This is the first girl Thompson, female Thompson, so it’s huge.”

The basketball player also spoke about how he perceives the difference between parenting a baby daughter and a baby son.

I think with a girl, you’re just so much more emotionally like… with a boy, it’s just like, ‘Hey man, you’ll be all right man. Stop crying.' But [with True], it’s like, ‘True, it’s gonna be okay. You know, we’re right here. Daddy’s here to feed you. It’s me! Look, yeah!’ It’s way different, but it’s fun, though. It changes you.

Thompson is speaking from personal experience — he also has a 17-month-old son named Prince from previous girlfriend, lifestyle blogger Jordan Craig. Her relationship with Thompson ended when she was pregnant.

Thompson's first child has been kept similarly in a low-key profile. His ex-girlfriend Craig has so far posted only two photos of baby Prince on Instagram: one from a distance and one where he's hidden in a white bathrobe. Thompson was rumored to have cheated on a pregnant Craig with Khloe, gossip that none of the involved parties have confirmed or denied. Some people found glee in the recent cheating scandal, but Craig seemed to have a mature response regarding such schadenfreude snark. She wrote on her Instagram Story following the rumors that Thompson cheated on Khloe:

If you respect yourself and you respect others, you would never make light of the misfortune of anyone, nor would you feel indemnified when it comes at the expense of others. Wishing peace for everyone.

In April, celebrity news sites Daily Mail, Page Six, and TMZ began circulating videos and reports of Tristan's rumored infidelity. In one unclear video, a man who is supposed to be Thompson shares an intimate moment with a brunette in a nightclub. In another video, Thompson and supposedly the same woman head into his team hotel, the Four Seasons in Manhattan. In the last of the three cheating videos, footage shows either Thompson or a man who looks a lot like him getting intimate with two women at a hookah bar.

Despite the cheating scandal, Khloe and Thompson are still together, it seems. Earlier this month, TMZ shared a photo of Khloe and Thompson having lunch with friends in Cleveland. Khloe also appeared at the Quicken Loans Arena in Cleveland to cheer for the Cavaliers as they won a close game against the Toronto Raptors, 105 to 103. The couple were lated spotted on a movie date without their daughter at a theater outside Cleveland.

The Kardashian and Jenner family has also tried to keep quiet on the scandal, possibly to respect the couple's privacy and baby True. At one point, though, family members reportedly unfollowed Thompson on social media.

The most notable exception to the silence was when Kim Kardashian appeared on Ellen DeGeneres and said what Thompson allegedly did was "so f*cked up." Regardless of your opinion though, it looks like Khloe and Thompson are moving on, sticking together, and parenting baby True together as partners.