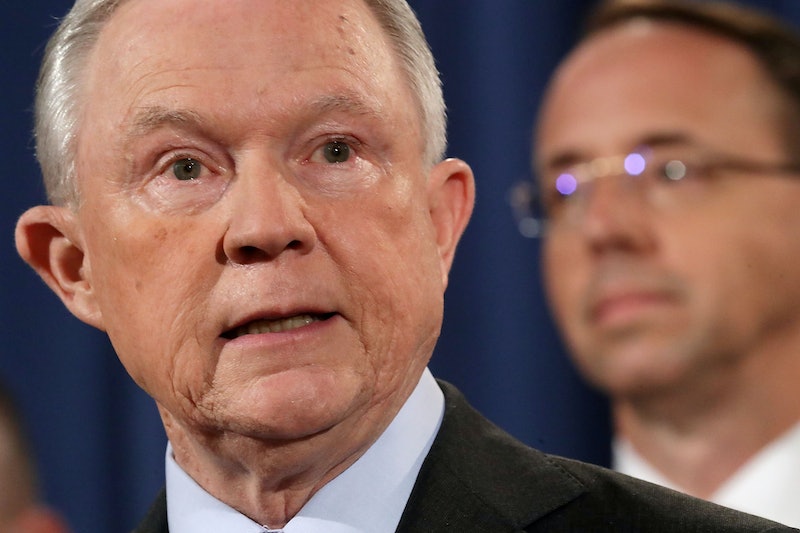 In an unprecedented break from decades of LGBTQ workplace policies, the Department of Justice filed a brief on Wednesday claiming that the Civil Rights Act of 1964 does not protect gay workers from discrimination. Lawyers under Attorney General Jeff Sessions argued in a federal appeals court that Title VII, which prohibits gender-based discrimination, does not apply to sexual orientation.

"The essential element of sex discrimination under Title VII is that employees of one sex must be treated worse than similarly situated employees of the other sex, and sexual orientation discrimination simply does not have that effect," the DOJ brief stated.

The DOJ filed the briefing as a part of the ongoing lawsuit Zarda v. Altitude Express, a legal battle in which a male skydiving instructor claimed that he was fired by his employer in 2010 specifically because he was gay. A district judge initially dismissed the claim, arguing that LGBTQ individuals were not protected under Title VII. The case was appealed in 2017 and brought to a federal court.

The court invited outside parties to weigh in on the case, though it is unclear why the DOJ decided to do so, given that the federal agency typically stays out of private employment lawsuits.

Title VII is kind of a tricky mandate. While its text clearly states that it is "unlawful to discriminate against someone on the basis of race, color, national origin, sex (including pregnancy and gender identity) or religion," the scope of exactly who that protects has been hotly contested for years. The absence of the specific term "sexual orientation" has left many LGBTQ individuals susceptible to workplace discrimination.

But at least one federal agency has already expressed its belief that these individuals are protected under Title VII. The Equal Employment Opportunity Commission, an autonomous agency that handles civil rights disputes in the workplace, has declared for the past several years that anti-gay discrimination is based on sex stereotyping and amounts to discrimination on the basis of sex, which is prohibited by the Civil Rights Act.

The DOJ, however, challenged that viewpoint, stating in its court briefing that "the EEOC is not speaking for the United States and its position about the scope of Title VII is entitled to no deference beyond its power to persuade.'"

Given that this was just a court argument and not an actual policy proposal, the DOJ's comments on anti-gay workplace discrimination will have no tangible effects — at least for the time being — on LGBTQ workplace rights. But the fact that the agency went out of its way, without being directly asked, to suggest that anti-LGBTQ workplace discrimination should be allowed by law, on the same day that President Trump banned transgender individuals from serving in the military, is definitely cause for concern.