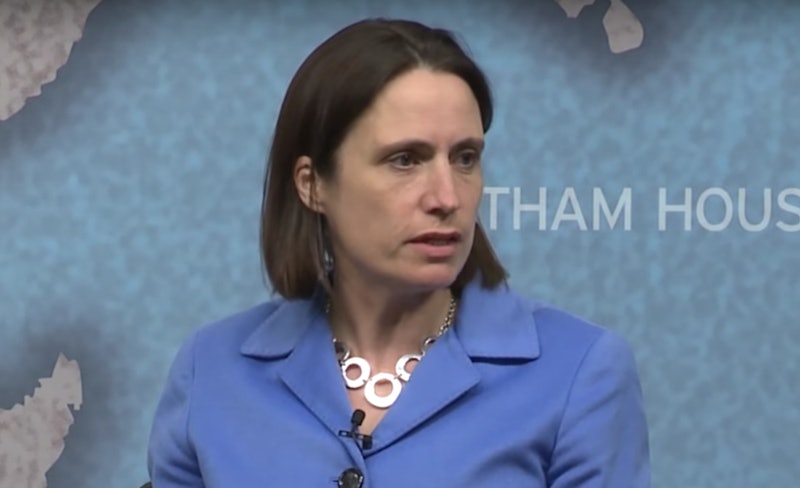 Although details of the discussion between President Trump and Russian President Vladimir Putin in Helsinki were kept under wraps, a photo of their joint meeting highlights a stark imbalance. Only one woman political adviser had a seat at the table with the two world leaders on Monday. So, who is Fiona Hill? The Trump adviser and Russia expert has had disagreements with the president in the past.

Hill currently serves as the senior director for Russian and European Affairs on the National Security Council. She was part of the U.S. delegation at the table on Monday along with White House Chief of Staff John Kelly, Secretary of State Mike Pompeo, National Security Adviser John Bolton, and interpreter Marina Gross, CNN reports.

The British-born Russia expert left the Brookings Institution, a D.C. think tank, to join the Trump administration last year. She's faced at least a few hurdles at the White House, however. The president once reportedly assumed she was a clerical aide and handed her a memo he had marked up for her to rewrite, The Washington Post reported last year. Trump reportedly became "irritated" when she looked confused, prompting then-National Security Adviser H.R. McMaster to "scold" Hill.

Before that mixup, Trump didn't invite Hill to his meeting with Putin at the G20 summit last summer because he was apparently worried about people leaking the specifics of their discussion. Trump officials reportedly pushed for Hill to be involved, though, as including a critic of Putin might help alleviate concerns that Trump was too close with the Kremlin.

"If [Hill] wasn't there it would be pretty bad, this is the most momentous thing in her portfolio," former Pentagon Russia policy chief Evelyn Farkas, told The Daily Beast last year. The only valid reason for Hill not to be in the room would have been to make room for McMaster, according to Farkas.

She was similarly excluded from Monday's one-on-one conversation between the leaders, but was a part of the larger meeting between Trump, Putin, and their top aides. Her absence worried some foreign policy experts that Putin would have the upper hand with Trump.

“I’ve been in half a dozen meetings with Putin with various U.S. government officials including Obama and he is an effective communicator of his point of view,” Michael McFaul, a former U.S. ambassador to Russia, told Rolling Stone. “I worry that with a president like Trump who just doesn’t have that same experience with foreign policy that he could be nodding along with the Putin narrative.”

Hill was initially tapped to join the National Security Council under Michael Flynn's leadership, the former national security adviser who pleaded guilty to lying to the FBI during its Russia probe. She eventually started the job after McMaster took over for Flynn.

The psychological profile of Putin she co-authored with Clifford G. Gaddy, Mr. Putin: Operative in the Kremlin, offers a glimpse into how she views the Russian leader. The duo wrote that the Kremlin is “a master at manipulating information, suppressing information, and creating pseudo-information” who isn't afraid to blackmail other foreign leaders. "As he can fully trust only himself, Putin applies extortionary methods to everyone else — basically mutually assured incrimination to ensure loyalty," they write.

Her book also says that the Kremlin doesn't always stick to the truth: "Putin has spent a great deal of time in his professional life bending the truth, manipulating facts, and playing with fictions. He is also, we conclude, not always able to distinguish one from the other."

Hill and Gaddy's description of Putin as a master manipulator only adds to concerns that the presidential adviser wasn't included in Trump's and Putin's one-on-one meeting.