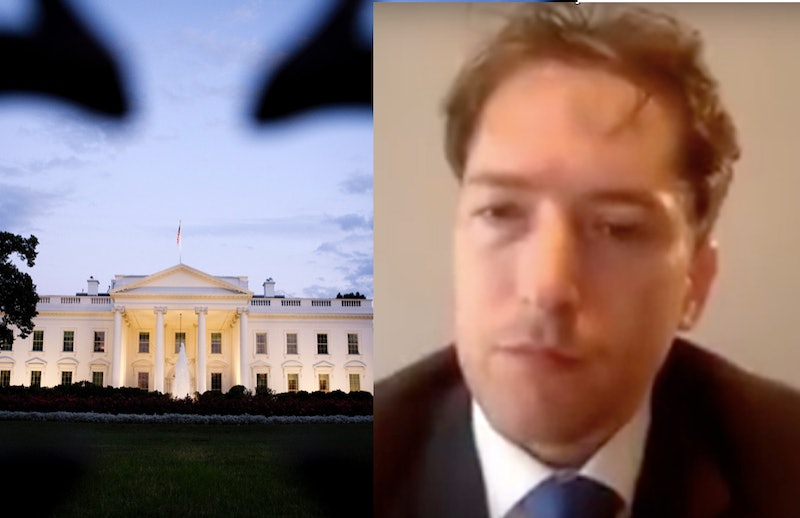 Late last week, Trump speechwriter Darren Beattie was reportedly fired from the White House after news outlets asked about his relationship to a white nationalist group. Beattie has confirmed that he did participate in a 2016 conference for the group, known as The Mencken Club, but he denies that he said anything "objectionable." The White House has declined to confirm whether Beattie's association with the conference is the reason he no longer works there. Bustle has reached out to the White House for comment.

"In 2016 I attended the Mencken conference in question and delivered a stand-alone, academic talk titled 'The Intelligentsia and the Right.' I said nothing objectionable and stand by my remarks completely," Beattie told CNN in an email over the weekend. "It was the honor of my life to serve in the Trump Administration. I love President Trump, who is a fearless American hero, and continue to support him one hundred percent. I have no further comment."

CNN asked the White House about Beattie's association with The Mencken Club last week, after which White House officials reportedly asked Beattie to step down, according to The Washington Post. When Beattie declined to leave voluntarily, he was fired, per the Post.

The Southern Poverty Law Center (SPLC) has, in the past, described The Mencken Club as "a band of white nationalists, pseudoacademic and academic racists." According to SPLC, The Mencken Club "has hosted some of America’s most prominent white nationalist ideologues in the past, and serves as a safe space for professors to vent their racist views."

As a visiting professor at Duke University in 2016, Beattie was among a group of academics who publicly endorsed Trump's bid for the presidency, CNN reported. He also wrote an op-ed for the student newspaper at Duke in which he defended Trump's controversial travel ban.

"To take a more personal example, I wonder whether a campus climate in which only one faculty member in the entire university openly supported Trump's candidacy—namely, me—reflects a more significant threat to higher education than a temporary restriction of travel from the nations in question," he wrote, continuing, "that is, if we take the value of national diversity as a proxy for the more fundamental value of ideological diversity in higher education."

The Trump administration has previously been criticized for its handling of white nationalist events. Such was the case after the initial Unite the Right rally in Charlottesville, Virginia, which took place in August 2017. One woman, Heather Heyer, was killed when a man drove a car into a crowd of counter-protestors. Trump initially remarked that there was "blame on both sides," triggering criticism from both Democrats and Republicans.

White nationalism in the United States, of course, is nothing new, though overt public displays of it and other racist rhetoric have dominated certain sectors of public discourse since the 2016 election. Beattie's post-White House employment plans have not yet been reported.