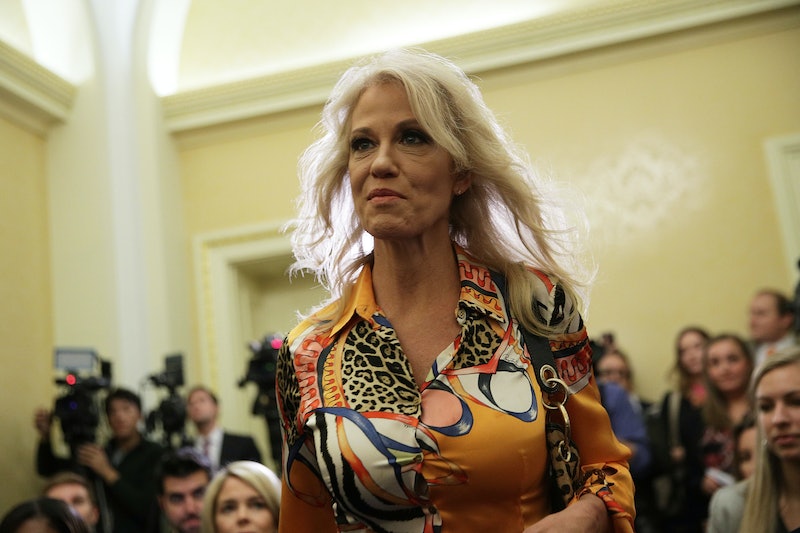 On Wednesday, Attorney General Jeff Sessions announced that President Donald Trump's counselor Kellyanne Conway will take on the opioid crisis, overseeing all White House initiatives combating the current overdose epidemic. More than 52,000 people lost their lives to drug overdoses in 2016 alone, according to a CNN report, with at least 33,000 of them were due to opioid drugs, including prescription painkillers. Trump labeled the opioid crisis a public health emergency in October.

Now, the president is calling for an "opioids czar" to lead efforts against the epidemic — and Conway is taking on that role. She will "coordinate and lead the effort from the White House" related to the opioid crisis, Sessions said at a news conference on Wednesday.

However, he also pointed out that the administration still doesn't have anyone leading the Office of National Drug Control Policy, nor has it released a comprehensive strategy for addressing this public health crisis. Trump has previously said he'd like to launch an advertising campaign similar to Nancy Reagan's "Just Say No" campaign, which was widely unsuccessful.

There's also less than $60,000 in the national public health emergency fund, and so far no one has requested more money from Congress to allocate towards this epidemic — which is expected to cost more than $500 billion annually. According to Sessions, in the new budget, Trump is requesting "more than $1 billion in anti-opioid efforts," adding that he would consider additional funds if they can show their efforts are working.

Only, a lot of people aren't impressed with that number. New Jersey Gov. Chris Christie said at a congressional hearing on Tuesday that "$1 billion [is] nothing for [a] national problem when [New Jersey] alone [is] spending $500M a year on [the] problem," tweeted BuzzFeed's Dan Vergano.

Christie also called the need for an opioids czar "overblown." He feels that they already know how to handle the issue, and it starts with limiting the prescriptions for painkillers, cutting fentanyl exports from China, and providing naloxone to communities, BuzzFeed reported. Naloxone blocks and reverses the effects of opioid drugs, and gives non-medical people the ability to save lives. While it's controversial, as some say it enables more drug use, it's been shown to decrease the number of overdoses. There are also drugs, like methadone and buprenorphine, shown to help recovering addicts stay in treatment longer.

The federal government needs to launch an all-out effort to ensure all FDA-approved forms of medication-assisted treatment — meaning methadone, buprenorphine, and naltrexone — are available to anyone who needs them without delay. These medications are a huge help in keeping people in treatment. That treatment must also include access to counseling and job training, so that people can recover from the disease of addiction. Methadone and buprenorphine in particular have been shown over many years of research to cut death rates from opioid addiction in half.

Unfortunately, there's a stigma surrounding a lot of these treatments — people view it as trading one drug, for instance heroin, for another, like methadone. But scientific evidence continues to show the benefits of medication-assisted treatment versus complete abstinence. This has led the Hazelden Betty Ford Foundation, a top treatment provider in the United States, to even start providing anti-addition medications as part of its recovery program.

But Conway's expertise isn't so much in medicine or addiction as it is in "messaging," according to Sessions.

[W]e've got to change the perception in this country and try to reduce [addiction] through prevention.

He also emphasized a focus on law enforcement to deal with the crisis.

By enforcing our laws, we help keep illegal drugs out of our country, reduce their availability, drive up their price, and reduce their purity.

Still, many feel the country needs a lot more than a good ad campaign and stricter laws. "We have spent billions on the failed 'war on drugs' and have learned that exclusive focus on law enforcement will not end the epidemic or save lives," Pfeifer says. "The evidence is with addiction treatment — and that is where funding should go."

More like this
How To Fight For Reproductive Rights, Based On How Much Time You Have
By Courtney Young
LGBT+ Men Fleeing Afghanistan Were Denied Asylum By The Home Office, New Findings Show
By Sam Ramsden
Michigan’s Governor Is “Going To Fight Like Hell” To Protect Abortion Access
By Andrea Zelinski
Harry Styles Called For "Backlash" In Powerful Statement On Abortion Rights
By El Hunt
Get Even More From Bustle — Sign Up For The Newsletter