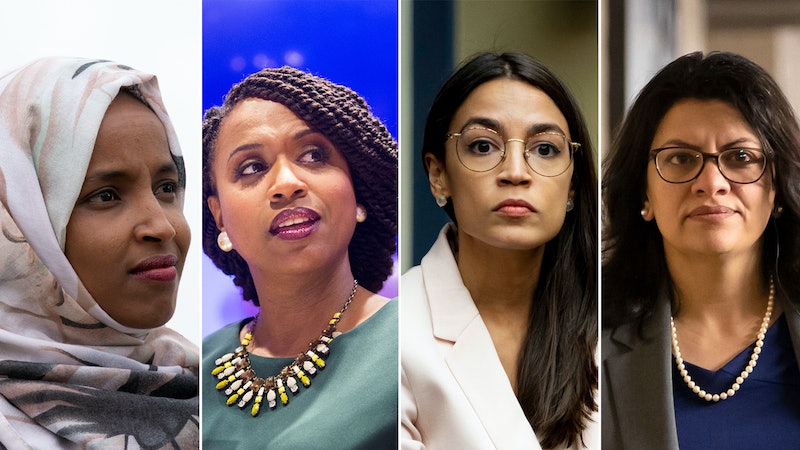 In this op-ed, writer Zahida Sherman explains what President Donald Trump's attacks on congresswomen of color — and the representatives' responses — reveal about the unique burden women of color in leadership carry.

"Go back to your country" is a common taunt meant to demean, ostracize, and shame people of color who dare to exist in mostly white spaces. Years ago, when I was in college, I was walking back to my dorm when I saw the words “n*****s go back to Africa” written in permanent marker on a bulletin board for the Office of Multicultural Affairs. After my initial shock, I instantly recognized what the graffiti was intended to do. Whoever wrote it wanted me and my Black classmates to know that we weren’t safe or welcome at our predominantly white college. They wanted us to be afraid.

For centuries, Americans have told non-native people of color whose families immigrated to the United States, whether by force or by choice, to “go back to our countries.” This phrase is meant to uphold an America where whiteness is idealized and rewarded. Over the years, our government and presidents have maintained a version of America that erases people of color through policies like redlining, internment, sterilization, and immigration laws that favored whites.

When President Donald Trump tweeted that members of “The Squad” — Democratic Reps. Ayanna Pressley of Massachusetts, Rashida Tlaib of Michigan, Alexandria Ocasio-Cortez of New York, and Ilhan Omar of Minnesota — should go back to their countries, he was invoking a historical tradition that systematically silences and excludes people like the four outspoken rookie congresswomen of color.

“So interesting to see ‘Progressive’ Democrat Congresswomen, who originally came from countries whose governments are a complete and total catastrophe, the worst, most corrupt and inept anywhere in the world (if they even have a functioning government at all), now loudly and viciously telling the people of the United States, the greatest and most powerful Nation on earth, how our government is to be run,” Trump wrote Sunday. “Why don’t they go back and help fix the totally broken and crime infested places from which they came.”

Trump’s comments are not particularly surprising, given his past racist and sexist remarks. His sentiment isn’t even particularly new to The Squad, who have long been told that they don’t belong in predominantly white spaces of power. Ocasio-Cortez has often underscored that women like her — young, working-class, female, and Puerto Rican — aren’t “supposed” to run for Congress. Omar marked multiple firsts in her appointment to Congress for being Somali-American, a former refugee, and hijab-wearing.

Women of color know what it’s like to be placed at the margins of our society and how to use those experiences to fight for everyone.

The Squad brings to light the unfair burden that female leaders face in spaces that weren’t created for them. As a director of a multicultural center, I've seen how female leaders of color are barraged with insults and challenged to prove our right to work and lead, from the college classroom to Congress. A survey commissioned by YWCA USA last year revealed that over two-thirds of Black and Latinx women experience discrimination at work. I have seen my Black and Latinx colleagues code-switch, speak in low tones, and change their appearance in an attempt to make their white peers feel less threatened by their presence and authority.

While Ocasio-Cortez, Omar, Pressley, and Tlaib face constant backlash for their race and gender, they also repeatedly challenge power in a way that is distinct to women leaders of color. These women fearlessly challenge Congress to be more welcoming and inclusive, and do so while being true to themselves and their cultures. Their presence as congresswomen and the ways they combat racism and sexism show us yet again how women of color are forced to fight for everyone to belong, to win, to be treated justly. For every slight, every attack, every accusation, these women strategically fight for themselves and everyone they’ve sworn to represent. Women of color know what it’s like to be placed at the margins of our society and how to use those experiences to fight for everyone.

In this situation, the congresswomen addressed the attacks against them head-on. Omar reminded Trump of her title, and by extension, her right to serve in Congress. She schooled him on what congressional oaths mean, something Trump disregards in his racist arguments. Ocasio-Cortez let Trump know where she actually comes from, where her allegiance lies.

Next, they redirected and refocused the conversation on what’s actually important. After directly calling out Trump’s racism, Ocasio-Cortez highlighted the issues she and many other Americans are fighting for, like accessible health care and education. Tlaib, who pointed out that she’s from Detroit, added that she is fighting against corruption in the American government.

Given The Squad’s personal and political experiences within communities of color, they have actively represented American voices that are otherwise shut out of decision-making. Their perspectives have allowed them to shed light on the ways that power and privilege excludes so many Americans.

We will never know how The Squad privately responds to Trump’s tweets, or any of the racist and sexist comments they receive from internet trolls on a daily basis. Do they ever break down? Scream? Break plates? We can only imagine. I worry about the mental and emotional toll it takes for these women to be so strong, so fearless, and so selfless in the face of such hatred.

So, instead of just praising Ocasio-Cortez, Omar, Pressley, and Tlaib for how they are fighting, we should take up the fight in whatever ways we can in our personal lives, at the polls, at work, and beyond. We owe it to them — and to our future.