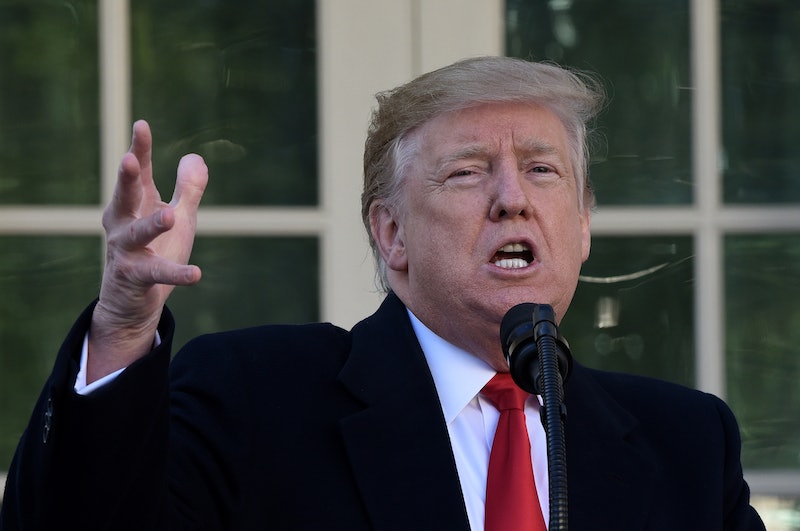 Roughly 1,000 people lost their jobs in the media industry this week as HuffPost, BuzzFeed, and Gannett Co. — which owns newspapers across the country — laid off writers, editors, and other employees. But staffing cuts weren't all that journalists had to contend with; some reporters have been receiving death threats on social media, and President Donald Trump attacked laid-off journalists for "bad journalism" on Twitter. Bustle has reached out to the White House for comment.

"Fake News and bad journalism have caused a big downturn," Trump tweeted on Saturday, referring to a New York Post article about the media layoffs. "Sadly, many others will follow. The people want the Truth!"

According to NBC News, many reporters who were laid off this week have received death threats from online trolls as part of a coordinated effort on the far-right bulletin site 4chan. Some of these threats included racial slurs, violent images, and swastikas, per NBC News, and were not immediately taken down by Twitter.

Trump's response to the layoffs — especially in light of the other attacks that many journalists have faced — swiftly triggered outrage on social media, with the editors-in-chief of HuffPost and BuzzFeed condemning the president's remarks. HuffPost Editor-in-Chief Lydia Polgreen argued that the media workers who lost their jobs this week "do not deserve this cruelty," while BuzzFeed Editor-in-Chief Ben Smith slammed Trump's tweet as "disgusting."

Trump has been especially critical of BuzzFeed this month, after the outlet published a bombshell report alleging that the president had directed his former lawyer — Michael Cohen — to lie to Congress about negotiations to build a Trump Tower in Moscow. In a rare move, Special Counsel Robert Mueller's office disputed the BuzzFeed report, prompting Trump to express his appreciation — though BuzzFeed stood by its reporting. Trump subsequently told reporters that journalists had lost "tremendous credibility" by publishing such a report, per USA Today.

But Trump's suggestion that the BuzzFeed and HuffPost layoffs were caused by "bad journalism" is not the first time that he has gone after the media. Even before he was elected to the presidency, Trump routinely accused numerous media outlets — from The New York Times to CNN — of being "fake news," and NPR reported last year that the list of things he perceives as "fake" appears to be growing longer with each passing day.

This week, BuzzFeed announced that it would lay off roughly 15 percent of its staff, per The Hill, while HuffPost reportedly laid off approximately 20 journalists on Wednesday. Trump argued in his tweet that these layoffs were caused by the publication of "fake news," but some Twitter users pointed out that staffing cuts at prominent media organizations started long before Trump's presidency:

While laid-off media workers have faced attacks from both the president and online trolls, they have also received demonstrations of solidarity from their fellow reporters. In the meantime, a Twitter spokesperson reportedly told NBC News that the company is taking steps to combat coordinated efforts targeting journalists.