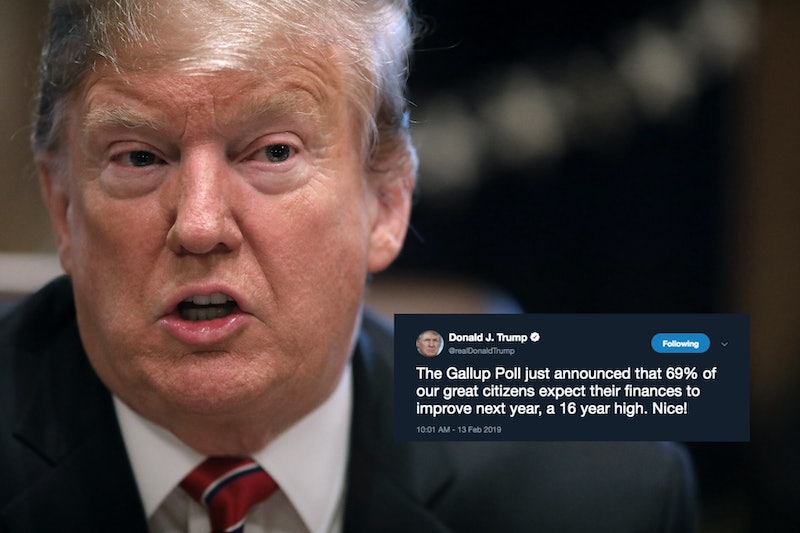 President Donald Trump shocked the Twitterverse on Wednesday, but this time for a totally awkward reason. No attacks on the media, not a cry of "no collusion" — rather a potential joke about 69ing. Yep, Twitter thinks President Trump made a "69-nice" joke. If you were also blissfully unaware, there's evidently a long-standing meme of replying to anyone who writes "69" with the word "nice" as a reference to the sexual act.

"The Gallup Poll just announced that 69% of our great citizens expect their finances to improve next year, a 16 year high. Nice!" Trump posted Wednesday morning. Thousands of people had already responded to the tweet by noon on Wednesday. Some just responded "nice" — evidently in on the joke — while others expressed their shock or awe that the president had just seemingly shared his own version of the sexual meme.

"[W]here were you when the meme died," asked Amy Brown. "*gingerly lays 69 to rest in the meme cemetery between dat boi and harambe* goodbye old friend," she added in a response to herself.

"Ah shit, Trump did a 69/nice tweet, which means I'm never going to do one again, which means there's little reason for anyone to follow me anymore," Scott McLaughlin tweeted, showing the impact Trump's use of the meme (accidental or not) had on other users.

Some workplaces debated whether it was an accident. "[C]urrent debate in the work group chat is whether trump's 69/nice reference is deliberate or coincidental. what say you?" Siraj Hashmi asked.

Others pointed out that he had drafted a similar tweet back in 2016 with both "69" and "nice" involved. "The U.S. has 69 treaties with other countries where we would have to defend them and their borders. How nice, but what do we get? NOT ENOUGH," Trump tweeted in May 2016. At the time, Twitter users also responded with just "nice."

For those unfamiliar, The Daily Dot compiled a complete guide to the history of the 69 meme. It reportedly started with one harmless tweet back in 2007, with a user tweeting about the number of followers he had. "Nice," he added. And the meme was born.

Former President Barack Obama was also teased with "nice" responses once for a tweet about Merrick Garland's potential confirmation hearings (which never happened). Obama said 69 percent of Americans supported the Senate having a hearing. Mashable reported that hundreds of people responded with "nice," but Obama didn't include it himself in the wording of the tweet.

Trump's 69-nice tweet from Wednesday shared positive news about the economic outlook. Bloomberg has tracked every time that the president says something about the economy and then shows how the stock market moved that day, potentially responding. So far the Dow is up on Wednesday, but it seems to have more to do with China than Trump's comment.

This Trump tweet may have been a bit unusual, but his other main tweet from Wednesday should ring a bell. It was all about collusion.