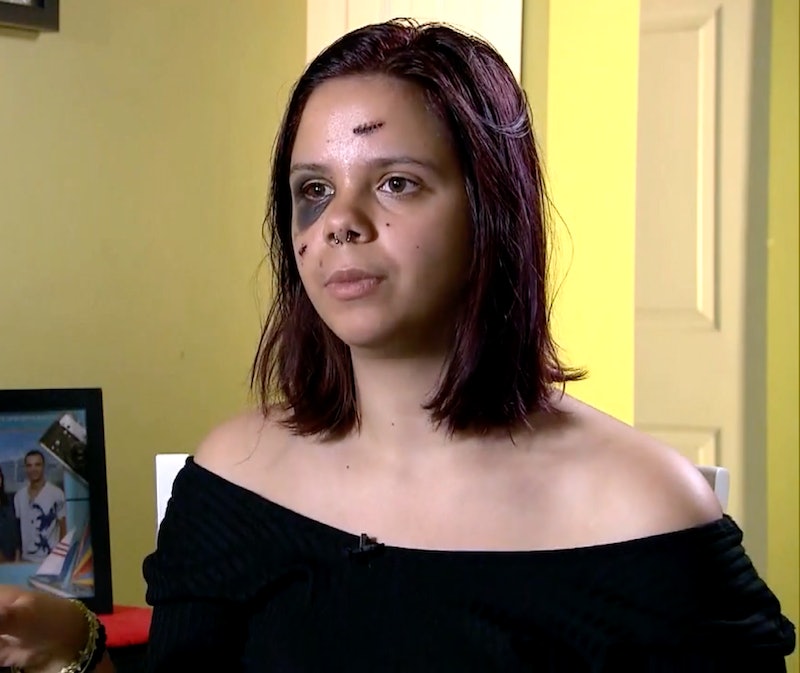 This week, President Trump has been reaching out to survivors and families of the victims of the Parkland shooting. Some of them were pleased with his efforts, but many were not, and perhaps no one was less pleased than Samantha Fuentes, who responded to Trump's phone call by saying that she's "never been so unimpressed by a person in my life."

After a year of high-profile blunders from Trump in the aftermath of crises — from a tone deaf call to the widow of a fallen soldier in Niger, to his decision to throw paper towels at hurricane victims in Puerto Rico — people are watching the president carefully in the wake of Parkland to see whether he'll display appropriate empathy. Knowing this, Trump's advisers gave him notecards to use for a meeting with survivors on Wednesday that reminded him to use phrases like, "I hear you," and "What would you most want me to know about your experience?"

Reactions to that meeting were mixed: Some participants said that the president "showed us nothing but love," according to The New York Times, while others left with the impression that "he's never going to feel what we feel."

Despite the varied responses, that meeting doesn't seem to have been a total disaster — so maybe he needed notecards for his phone calls, too. The president has evidently also been phoning some survivors this week, including Samantha Fuentes, an 18-year-old senior who recently left the hospital. She was shot in both legs and still has a bit of shrapnel behind her eye. The piece of metal might be left there permanently if it doesn't migrate to a more dangerous area.

Fuentes told the Times that Trump "didn’t make me feel better in the slightest" during their conversation. She described him saying "'oh boy, oh boy, oh boy,' like, seven times" and calling the gunman a "sick puppy," which is a fairly flippant term for a mass murderer.

Trump's ego apparently manifested itself in the phone call, too; he told Fuentes that he knew she was a "big fan."

Fuentes bluntly summed up the call by saying, "Talking to the president, I've never been so unimpressed by a person in my life."

People on Twitter were in turn outraged by Trump's remarks to Fuentes and delighted by her willingness to criticize them.

"Samantha Fuentes, already a legend," wrote one person, and another, "Samantha Fuentes is my new hero." In response to her comment that she'd never been less impressed by anyone, one Twitter user wrote, "America to Samantha Fuentes: same."

Fuentes says that she saw students shot down on either side of her during the attack on Feb. 14. "I ran forward because I panicked," she told Inside Edition. "Then I was in clear view of the window and of where the shooter was standing. That is when he just started to spray the room." She jumped to the floor and managed to avoid a fatal injury.

She says that she feels guilty for surviving the attack when so many others did not. But she's already throwing herself passionately into the gun control fight in honor of her fallen peers who can't do so themselves.

"My survival is important now more than ever because there is a face and there is a voice to what happened," she told Inside Edition. "I think it is important for people to have a physical reminder of what it looks like. That is why I am showing my face. I am not very shameful of it at all because it is [the] truth."

Fuentes just one of the many Parkland students who is now a committed gun control activist. These students have organized a "March for Our Lives" that will take place on March 24 in Washington, D.C. (sister marches will also occur around the country) and multiple school walk-outs, including one set for April 20, the 19th anniversary of the Columbine shooting.