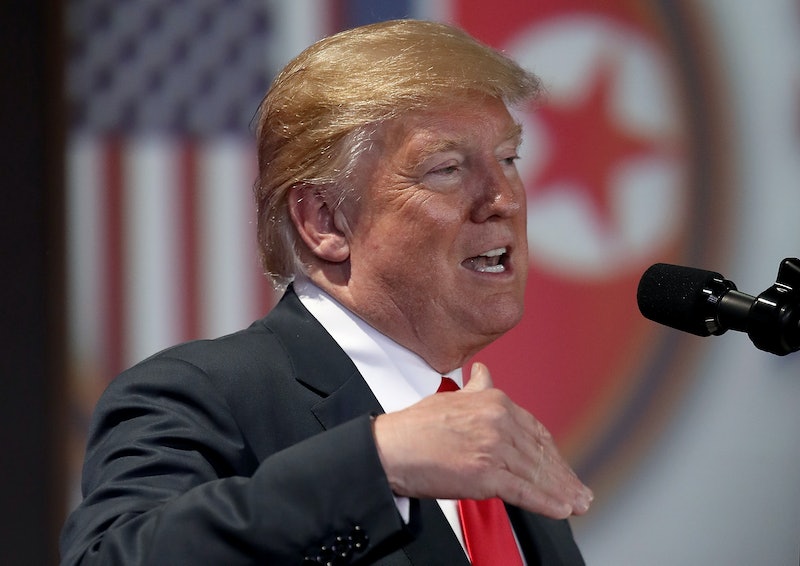 During a press gaggle on the White House North Lawn, President Trump called Weijia Jiang, a female reporter, "obnoxious" and told her to be "quiet" multiple times on Friday for asking follow-up questions about North Korean nuclear disarmament. It all started because he wanted to visit the hosts of Fox & Friends.

On Friday morning, Trump tweeted: "Wow, the highest rated (by far) morning show, @foxandfriends, is on the Front Lawn of the White House. Maybe I’ll have to take an unannounced trip down to see them?" And so he went, down to the White House North Lawn where Fox & Friends was — but also right next to almost every other journalistic outlet covering his administration that morning.

When he finished with Fox & Friends, Trump was confronted with an informal press gaggle that accompanied him as he walked along the driveway. The reporters started lobbing questions at the president, who is usually cordoned off behind a podium or behind his phone screen when interacting with reporters. Press gaggles, particularly such informal ones, can be a battle of who can speak the loudest and get the attention of the speaking official.

There were questions about Trump's recently concluded summit with North Korean leader Kim Jong Un, including from Jiang, a CBS News correspondent. Jiang first asked Trump about how he defends Kim's human rights records when he was so critical about the North Korean government's treatment of Otto Warmbier, an American who was detained in North Korea for 17 months.

"You've spoken so passionately about the circumstances that led to Otto Warmbier's death. In same breath, you're defending now Kim Jong Un's human rights records. How can you do that?" Jiang asked. In reply, Trump said, "You know why? Because I don't want to see a nuclear weapon destroy you and your family."

"Are you declaring that this nuclear threat from North Korea is over?" Jiang replied.

When Jiang asked follow-up questions, Trump started telling her to be quiet. "Quiet," Trump told the CBS News correspondent. He even started to bring his finger toward his lips to mime "shh" when Jiang spoke again. "She's so obnoxious," he said to someone off screen.

Then Trump told Jiang again, "Quiet." He even stuck his hand toward her face as if to cover up her question.

Jiang said he told her be quiet at least five times. Trump never did answer the question, according to Jiang's later tweets about the incident.

Trump dodged a question from another reporter about how the United States would verify nuclear disarmament by North Korea, a typically contentious area of any such agreement. He answered a question about collecting the remains of American soldiers from the Korean Peninsula, according to BuzzFeed News.

This is not the first time Trump has said questionable things to a female reporter. In August 2015, at the first Republican presidential primary debate Trump was offended by the opening line of questioning from then-Fox News host Megyn Kelly. She asked him about this past comments about women, including calling them "fat pigs, dogs, slobs, and disgusting animals." Trump said Kelly's questions were "ridiculous" and "off-base."

After the debate, in an interview with CNN's Don Lemon, he recounted his own experience of the debate and that opening question. "You could see there was blood coming out of her eyes," Trump said about Kelly's debate moderation. "Blood coming out of her wherever." Trump later clarified on Twitter that the blood comment was about her nose, not her vagina or period.