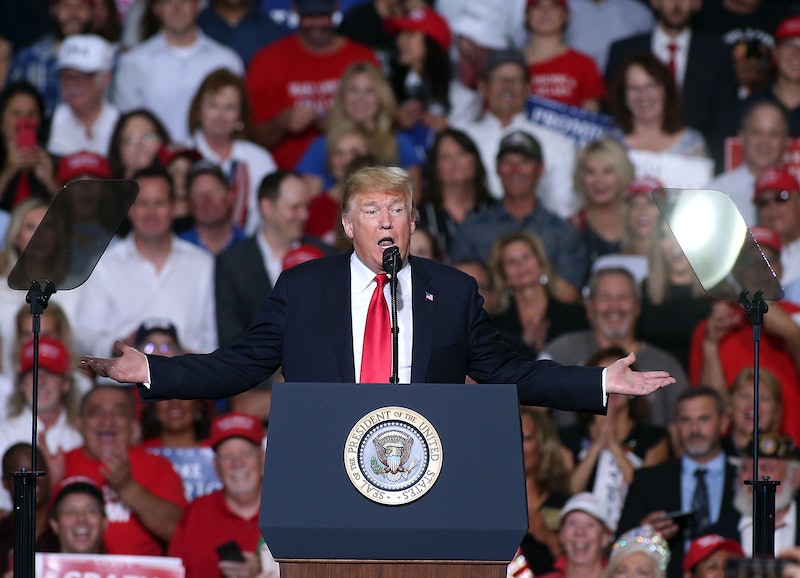 As November's midterm elections draw closer, President Donald Trump has continued to stump for Republican candidates across the country and on Saturday, he weighed in on Georgia's gubernatorial race. After reminding voters of his endorsement of Republican gubernatorial candidate Brian Kemp, Trump called Democrat Stacey Abrams "unqualified," despite her tenure as Atlanta's deputy city attorney and roughly 10 years serving in Georgia's General Assembly.

"Georgia Secretary of State Brian Kemp will be a great governor," Trump tweeted Saturday. "He has been successful at whatever he has done, and has prepared for this very difficult and complex job for many years. He has my Strong Endorsement."

Yet Trump didn't stop at simply extolling what he felt to be Kemp's accomplishments. Rather, the president also took aim at Abrams, Kemp's opponent. "His opponent is totally unqualified," he wrote. "Would destroy a great state!"

But even the most cursory glance at Abrams' resume leaves one with the impression that she's far from being "unqualified." As the deputy city attorney for Atlanta she was behind legal and policy analysis for numerous projects. What's more, she served in the Georgia House of Representatives from 2007 to 2017, and became the first woman to lead either party in Georgia's General Assembly when she was named House minority leader in 2010.

On Saturday, Abrams pushed back on Trump's characterization of Kemp as a success. "If success is suppressing eligible voters, leaking our Social Security numbers, and pointing a shotgun at a child on TV, I'll pass," she tweeted. "I'll take Medicaid expansion, excellent public schools, and good-paying jobs."

While Abrams has yet to directly address Trump's claim that she's "unqualified," others were quick to call out the president for his remark.

"Whatever your politics, it's flat wrong to call Abrams unqualified," Addy Baird of Think Progress wrote.

Meanwhile, Rolling Stone writer Jamil Smith insisted Saturday that it was important to correct Trump no matter the context of his tweet. "Stacey Abrams has more experience in elected office — more than 17 years — than does Brian Kemp (nearly 13)," Smith tweeted. "She is vastly better educated (Yale JD vs his bachelor's). Trump's assertion that she is 'totally unqualified' may have been made flippantly, but we should correct him."

Recent polls show Georgia's gubernatorial race remains in a near deadlock. According to Atlanta's WSBTV, an Oct. 11 The Atlanta Journal-Constitution-WSBTV poll found Kemp with a narrow lead at 47.7 percent compared to Abrams' 46.3 percent. The state's Libertarian candidate, Ted Metz, trailed behind with just 2.3 percent. But according to the network, Kemp's 1.4 percentage point lead could be "statistically insignificant" given that the poll has a margin of error of 2.8 percent.

Kemp was also reported to have a narrow lead over Abrams in a WXIA-TV/SurveyUSA poll from earlier this month. In that poll, Kemp lead with 47 percent compared to Abrams' 45, according to Real Clear Politics.

If elected, Abrams would be the first black woman to serve as governor in the United States.