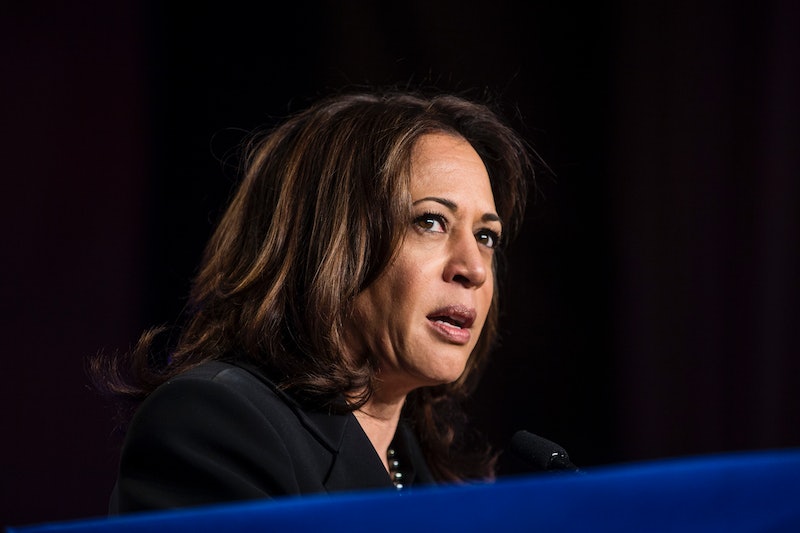 Hours after the California senator's harsh questioning of Attorney General William Barr in front of the Senate Judiciary Committee Wednesday, President Trump called Kamala Harris "nasty" — the second time he's used that word to describe her. In an interview with CNN, Harris responded to Trump's insult, and showed that she isn't the least bit fazed by it.

Harris drew much attention for her questioning of Barr. While discussing Robert Mueller's investigation into possible obstruction of justice by Trump, Harris asked if Barr had actually reviewed the evidence in the Mueller probe before issuing a widely-criticized summary of the report. In response, Barr acknowledged that he hadn't personally seen the evidence, contradicting his claim in the summary that "the evidence was not ‘sufficient to support an obstruction of justice offense.'"

At another point, Harris and Barr engaged in a protracted back and forth after Harris asked if "the president or anyone at the White House [has] ever asked or suggested that you open an investigation of anyone."

"The president or anybody else," Barr replied after having Harris repeat the question.

"Seems you'd remember something like that, and be able to tell us," Harris said.

"Yeah, but I'm trying to grapple with the word 'suggest,'" Barr replied. "I mean, there have been discussions of, of matters out there that — they have not asked me to open an investigation."

At that point, Barr was silent, and Harris moved on to another topic.

In an interview with Fox Business, Trump was asked about Harris' questioning of Barr.

"Well, she was probably very nasty," Trump said. "So you have Bill Barr, highly respected, great attorney general, and he's gotta take the abuse from people that are running for office?"

Of course, this isn't the first time Trump has called a prominent Democratic woman "nasty." He infamously referred to Hillary Clinton as a "such a nasty woman" during a 2016 presidential debate, and tweeted during the same campaign that Sen. Elizabeth Warren has "a nasty mouth."

During her interview with CNN, Harris also addressed Barr's refusal to say whether Trump or the White House had ever suggested that he launch any specific investigations into anybody.

"He did not answer the question, and I'm sure he didn't because he knew he was under oath, and he knew that he could potentially expose himself to perjury [charges] if he did not answer honestly," Harris said.