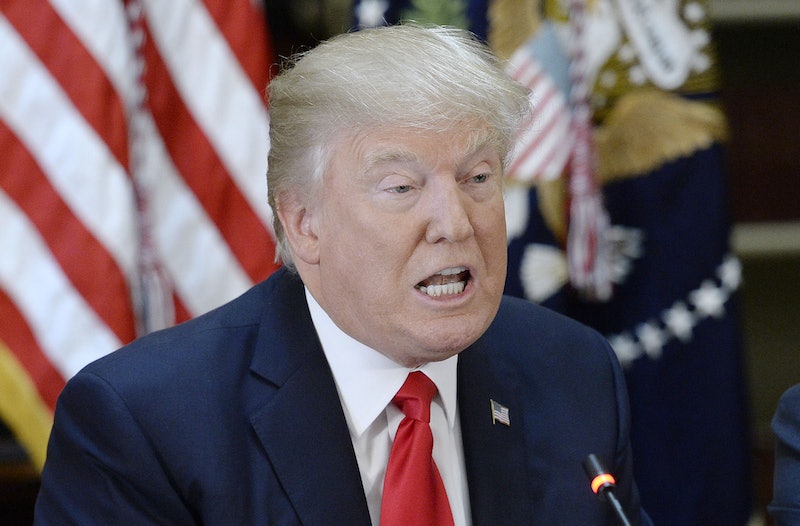 Last week, President Donald Trump authorized the first highly publicized military strike of his tenure ― not the first altogether, as he's overseen a number of controversial and highly lethal actions since taking office. But thanks to the utter about-face it represented as to his views on military invention in Syria, it got a lot of attention. This president's rarely been accused of being a detail-oriented guy, however, and he just proved that once again in an interview with Fox Business Network's Maria Bartiromo. Trump couldn't remember which country he bombed, although his memory of the dessert menu at Mar-a-Lago was definitely sharp.

In his televised sit-down with Bartiromo, Trump claimed that he gave the bombing order while dining with Chinese president Xi Jinping at his private Palm Beach, Florida resort.

Telling a grinning Bartiromo that he'd explain what happened "only because you've treated me so good for so long," Trump said he and Xi had been eating "the most beautiful piece of chocolate cake that you've ever seen" when ordered the firing of dozens of missiles at the Shayrat air base in Syria. Except he didn't seem to realize the missiles were bound for Syria ― he initially said Iraq, and Bartiromo had to step in and correct him.

I will tell you, only because you've treated me so good for so long. I was sitting at the table, we'd finished dinner, we're now having dessert, and we had the most beautiful piece of chocolate cake that you've ever seen, and President Xi was enjoying it, and I was given the message from the generals that the ships are locked and loaded, what do you do? And we made a determination to do it, so the missiles were on the way. And I said 'Mr. President, let me explain something to you,' this is during dessert, 'we've just fired 59 missiles,' all of which hit by the way, unbelievable, from you know, hundreds of miles away, all of which hit, amazing.

Trump seemed delighted at the fact that he could order an airstrike while munching on chocolate cake. Basically, Trump ― whom Slate's Osita Nwanevu aptly described as "our kid president" in response to this story ― clearly had chocolate frosting on the brain while answering Bartiromo's question. Which might be why a different, far more vital piece of information got pushed out: the name of the country he was attacking. Seriously.

So what happens is I said, 'we've just launched 59 missiles heading to Iraq.'

At this point, Bartiromo jumped in, reminding the president that the country he violated one of his foremost campaign promises by bombing was Syria, not Iraq. Trump accepted the correction, and kept the ball rolling: "Yes, heading toward Syria."

It was not an encouraging moment for anyone feeling unsure of how seriously or deeply Trump is taking the most powerful person on Earth. Nor, thanks to his litany of false and misleading statements throughout the campaign and in his previous life as a private citizen, is it even possible to take him at his word in retelling such a story. But hey, sure, the cake sounds great?