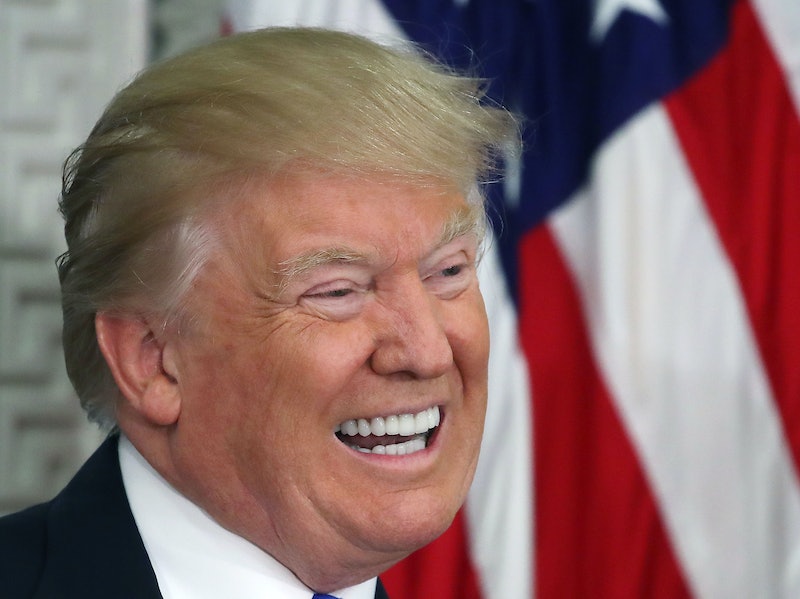 If you're looking for your next bedtime horror story, a recent tale by the president has got you covered. At an Ohio rally Tuesday night, Trump told a graphic story about undocumented, criminal immigrants using knives to "slice" and "dice" teenage girls.

His exact words were:

They don’t want to use guns, because it’s too fast and it’s not painful enough. So they’ll take a young, beautiful girl, 16, 15, and others and they slice them and dice them with a knife because they want them to go through excruciating pain before they die.

In his Tuesday night speech, Trump addressed job offshoring, gun control and health care in his speech before the audience chanting "Build the wall!" steered him onto immigration. Trump, a hardliner on the topic, applauded the Immigration and Customs Enforcement (ICE) for conducting the "largest single raid of transnational gangs in the history of our country." He also bragged about ICE finding and deporting undocumented immigrants who were endangering the country, calling them "animals" that have been protected for too long, he said.

It's unclear if the president was referring to a real-life account, but it echoes his comments about Mexicans being rapists and bringing drugs to the country when he announced his candidacy in 2015.

At Ohio on Tuesday, Trump also told the crowd that he was cracking down on sanctuary cities. He has previously made unfounded claims that sanctuary cities breed crime and provide safe havens for criminals. In a 2016 study, researchers from University of California, Riverside and Highline College found “no statistically discernible difference in violent crime rate, rape, or property crime across the cities.” Other studies show that in the U.S., immigrants commit fewer crimes than native-born citizens.

Along with his support of defunding sanctuary cities, Trump also expressed support for Kate's Law, which increases penalties for undocumented immigrants who return to the U.S. after having been deported earlier. The bill was named named after Kathryn Steinle, a San Francisco woman who is believed to have been gunned down by an undocumented immigrant. Last month the House passed legislation to defund sanctuary cities and enact Kate's Law.

Despite pressure from the federal government, there are 364 counties and 39 cities that refuse to cooperate with ICE, MSNBC reported with data from the Immigrant Legal Resource Center. “This is not a bunch of left-wing radicals," said Arizona pastor John Fife to MSNBC. "These are sheriffs and police chiefs." Law enforcement who oppose cooperation with ICE argue that it's not about harboring criminals, but rather public safety. Cops need their communities to trust them and can't do their jobs if immigrants, fearing retribution, refuse to talk to them."

With the president's recent speech on undocumented criminals, Kate's Law on the Senate's desk, and prototypes for the U.S.-Mexico border wall to be constructed by the end of summer, the Trump administration seems to be moving forward on stricter immigration policies.