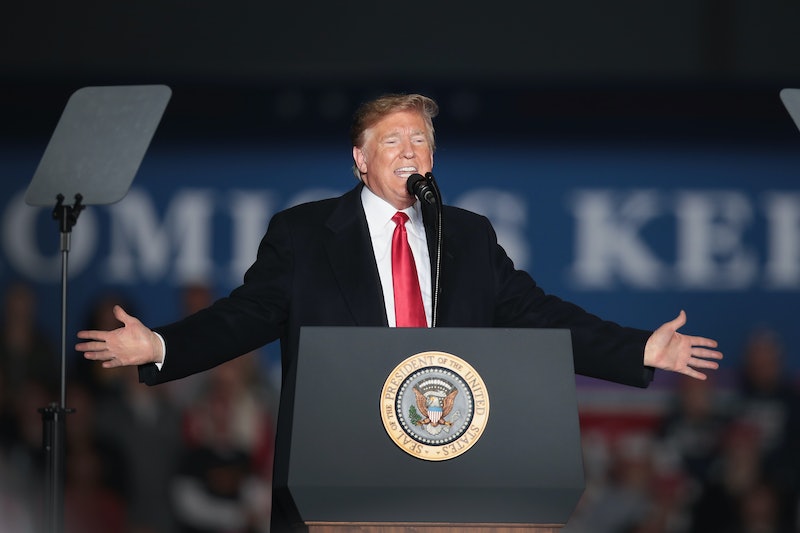 Hardline immigration moves have become one of the Trump administration's trademarks, but a recent report from Axios suggests that President Donald Trump will soon try to take a step farther. Trump claims he'll end birthright citizenship via executive order, he said in an interview on Axios' documentary series Axios on HBO.

While the president claims that an executive order is enough to make this change, experts have been quick to point out that it's likely to spark a fierce battle in the courts, as CNN wrote.

"It was always told to me that you needed a constitutional amendment. Guess what? You don't," Trump told Axios.

Birthright citizenship, as CNBC explained, means that anyone born in the United States, to citizens or non-citizens, is granted the right of U.S. citizenship and all of the benefits that it entails. This right comes directly from the 14th Amendment of the United States Constitution, which reads as follows:

The first line, which refers to "All persons born or naturalized in the United States," is the reason why, as Axios explained, most constitutional scholars do not believe that birthright citizenship can be rescinded by a unilateral action of the president. However, some conservative legal scholars have chosen instead to interpret the language of the amendment more narrowly.

"The notion that simply being born within the geographical limits of the United States automatically confers U.S. citizenship is an absurdity — historically, constitutionally, philosophically and practically," wrote former Trump administration national security official Michael Anton in an opinion piece for The Washington Post. His argument rested on the claim that the framers never meant for the first line to refer to the children of non-citizens, and that Trump could simply "specify to federal agencies that the children of non-citizens are not citizens." That claim, however, is highly disputed.

Based on what he told Axios about his reasoning for the move, Trump made the decision based on a false claim.

"We're the only country in the world where a person comes in and has a baby, and the baby is essentially a citizen of the United States ... with all of those benefits," Trump told Axios. "It's ridiculous. It's ridiculous. And it has to end."

The United States is far from the only country to grant birthright citizenship. Thirty-three nations do the same, including Mexico, Canada, and most of the Western Hemisphere, according to Politifact. Trump's definitive claims on his ability to strip birthright citizenship through an executive order also completely ignore the fights that would quickly ensue in court. Numerous commentators on Twitter have suggested that this claim, instead of being an actual policy goal, is instead meant to fire up his base before the midterms.

Beyond just stopping people from coming in, this move could actually force the courts to make a choice about redefining a right that most people have understood to be granted in the Constitution. Despite the president's confidence, the process would be far from over if he signed that executive order.