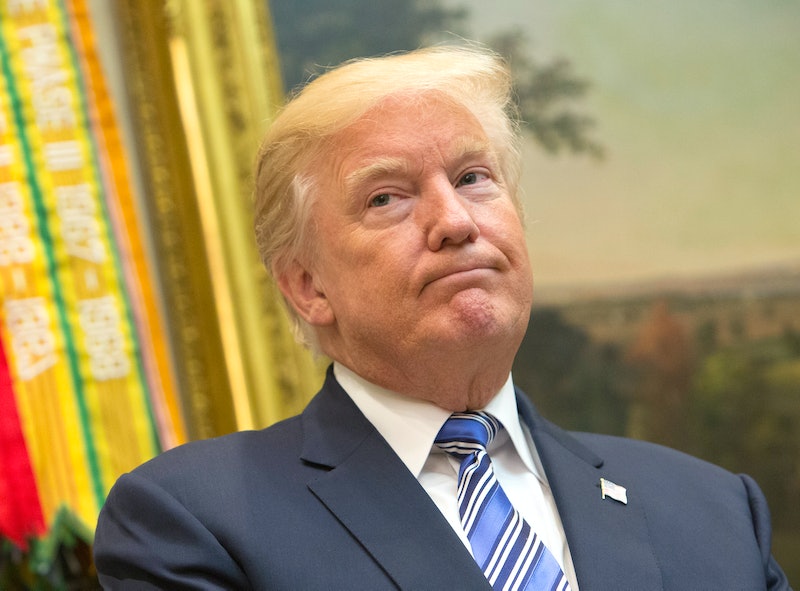 On Friday morning, President Donald Trump once again stoked simmering tensions between the United States and North Korea, commenting on Twitter that American "military solutions are now fully in place, locked and loaded." He faced questions about the ominous tweet later on Friday afternoon, and in defending his choice of language, he made a point about his popular support that may not have come across the way he intended. Namely, Trump said his North Korea threats make Americans "happy," citing "tens of millions" of people who support his behavior.

In all, the United States has approximately 323 million people living in it. As such, it's definitely true that tens of millions of them continue to support the president and his policies. He got more than 60 million votes last year, and even with his low approval ratings, polling suggests the vast majority of those voters still support him.

And despite the fact that North Korea has been making hyperbolic threats against the United States for decades, and has enormous reason to never actually use a nuclear weapon ― such an attack against America or an ally would almost certainly result in the destruction of the regime by means of a counter-strike, for one ― polling also shows that a majority of the public feels threatened by the heavily isolated nation.

I will tell you, we have tens of millions of people in this country that are so happy with what I'm saying, because they're saying finally we have a president that's sticking up for our nation, and frankly, sticking up for our friends and our allies.

Trump might be correct that tens of millions of Americans support him being open to some sort of military action against North Korea, regardless of the consequences that kind of action might hold. It's even possible that tens of millions support him escalating his verbal attacks on a hostile, nuclear-armed nation on social media in the early morning. After all, that would only need to be true of at least 20 million people to be technically true, which is only slightly less than a third of all the people who turned out to vote for him last year.

But that overlooks the hundreds of millions of people who didn't do that. About 66 million of those voted for his opponent (3 million more than voted for him, as often bears mentioning). And, of course, the tens of millions of people who were eligible to vote but chose not to ― just 58 percent of eligible voters actually went to the polls in 2016.

It remains to be seen what, if any, military action will result from the recent saber-rattling. American intelligence sources have reportedly claimed that North Korea has succeeded in miniaturizing nuclear warheads that can be equipped onto ICBMs, the inciting incident for this week of increased hostilities. While Trump has been turning up the heat recently, the Associated Press reports that there's also some back-channel diplomacy going on, as well.