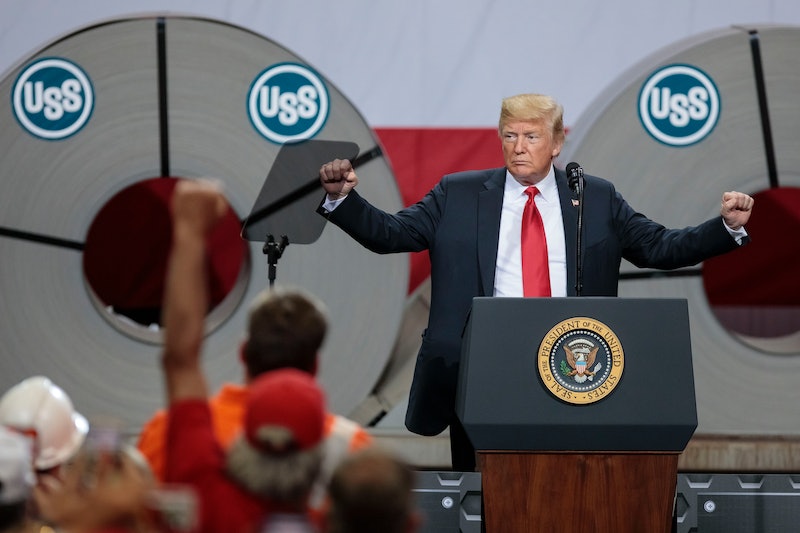 The 2016 presidential election took place more than 600 days ago and yet Donald Trump continues to talk about it. While speaking about the economy at a steel production facility on Thursday, President Trump falsely claimed he'd won the "women's vote" in the 2016 election against Democratic nominee Hillary Clinton. Data from the presidential election, however, easily proves the president wrong.

"I did win that women's vote, didn't I?" Trump said while delivering a speech in Granite City, Illinois. "Remember they said, 'Why would women vote for Trump?' Well, I don't know but I got more than she did. That's pretty good."

Still, not all women are white and a large percentage of women of color supported Clinton in the election. In fact, an overwhelming majority of black women — 94 percent, to be exact — voted for Clinton. CNN's exit poll also showed that Latina women also appeared to favor Clinton over Trump, with 69 percent casting ballots for the Democrat compared to the 25 percent who voted GOP.

But while Trump did have the support of some women during the 2016 election, recent polls show his support and popularity among women has fallen to some of its lowest levels. An NPR/PBS NewsHour/Marist poll released earlier this month found Trump's approval rating with women had fallen to 30 percent. Of those 30 percent, only 19 percent said they "strongly approved" of the job Trump was doing as president. Of the 62 percent who said they disapproved, 51 percent said they "strongly disapproved."

A recently-released Quinnipiac poll also found a similar slip in support for President Trump among women voters. According to that poll 31 percent of women now approve of the job Trump is doing as president. When broken down by gender, Quinnipiac found that 36 percent of white women approved of Trump as president while 61 percent disapproved.

The erroneous claim Trump made Thursday is not the first time the president has attempted to paint himself as the victor of the women's vote. While speaking at a rally in Pennsylvania in March, Trump falsely claimed to have won 52 percent of women's votes. "Remember, women won't like Donald Trump," the president asked the gathered crowd. "I said, 'Have I really had that kind of a problem?'... We got 52 percent. And I'm running against a woman. You know, that's not that easy."