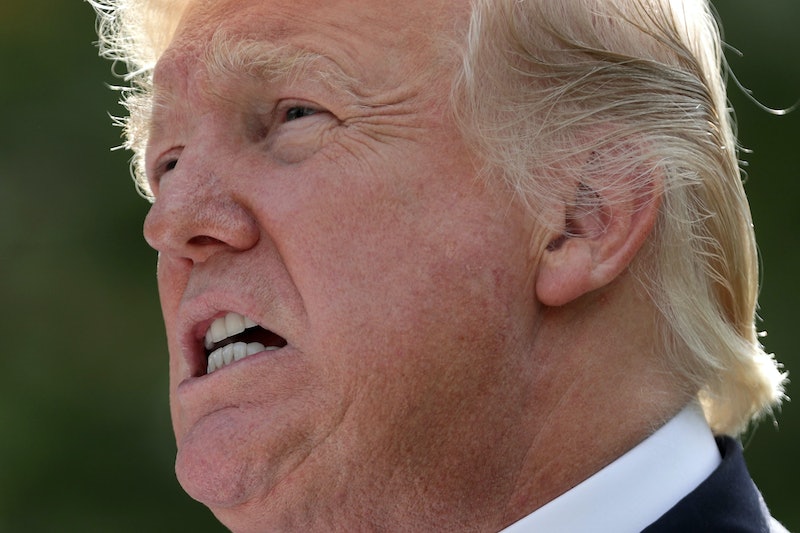 Less than a week after insulting Colin Kaepernick and other football players who don't stand for the national anthem, President Donald Trump argued in an interview Thursday that NFL owners are "in a box" following player protests. Trump said NFL owners are "afraid of their players," and described it as "disgraceful."

Trump consequently used the Fox and Friends interview to urge the NFL to enforce its own rules.

For the past week, Trump has heavily criticized NFL players for kneeling during the national anthem. On Sunday afternoon, he claimed to a reporter that these criticisms had "nothing to do with race," and that he was only seeking "respect for our country and respect for our flag.” But his inflammatory comments about the NFL and its players — which went so far as to call on team owners to drag their players off the field if they chose to kneel — ultimately resulted in widespread condemnation from NFL owners and players.

This reaction, however, did not discourage the president from continuing his tirade. He told Fox and Friends that the NFL's ratings would struggle if team owners didn't stand up to their players:

They've got to be tough, and they've got to be smart. Because you look at the ratings, the ratings are going way down. Stadiums are, I've seen a couple of stadiums over the last few weeks, there are a lot of empty seats. I couldn't even believe it. But when it comes to the respect of our nation, when it comes to the respect our anthem and our flag, they have no choice.

Trump has maintained that his criticism of the NFL is unrelated to race, but Kaepernick started taking a knee during the national anthem to protest police brutality and white supremacy in the United States. To criticize him and other kneeling NFL players — many of whom are black — in the name of the flag is to misunderstand the reasons for which they are kneeling in the first place.

Moreover, the president's insinuation that NFL owners — almost all of whom are white — are "afraid" of their players on their teams is steeped in racist undertones. ESPN host Jemele Hill — who was personally criticized by the White House after she described Trump as a white supremacist — slammed Trump's latest comments as "peak racial demagoguery" on Twitter.

But as the Guardian's Les Carpenter pointed out over the weekend, Trump's increasingly inflammatory comments about the NFL have also inadvertently renewed a national dialogue about racism. When Kaepernick initially started kneeling, he was soon voted as the most disliked player in the NFL. According to ThinkProgress, no white players participated in national anthem protests until last month. Now, athletes around the country have started kneeling or linking arms in solidarity, and some teams have stayed in their locker rooms as the national anthem played.

Kaepernick began taking a knee during the national anthem before Trump was even elected, because systemic racism did not start — nor will it end — with Trump. This has never just been about patriotism, or the right to free speech. Trump has framed it that way to dismiss NFL players as disrespectful and unpatriotic, but it is important not to lose sight of why Kaepernick started kneeling in the first place, and what it cost him to do so.