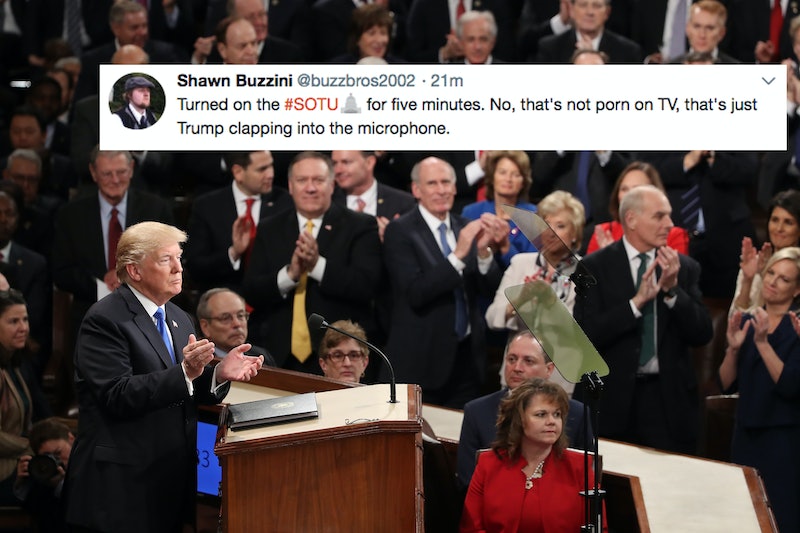 While delivering his first State of the Union address on Tuesday night, President Trump applauded several times while introducing the guests that he and Melania Trump invited to the address. There's nothing wrong with that — it's common for presidents to greet their guests with applause. But Trump clapped directly into the microphone, amplifying his applause disproportionately and, in doing so, driving entire Internet insane.

Trump's guests weren't the only ones to receive hearty applauses from the president, however. Trump also spent a good amount of time clapping for himself, giving himself many rounds of applause during his speech. However, most conversations about Trump's clapping focused not on who he applauded, but how he applauded.

In all fairness, clapping while giving a State of the Union is a delicate and tricky art. Position your hands too close to the microphone, and every one of those claps will be amplified for the entire audience to hear; position your hands too low, however, and nobody will be able to see that you're clapping. Trump decidedly opted for visibility, and held his hands mere inches away from the microphone during his many applauses.

Viewers were very quick to notice that something seemed odd about the president's applause.

There's no way around it: Trump's clapping, when blasted into his mic and projected through the House chambers, sounded like sex noises.

This seemed to be a very popular opinion on Twitter.

Let's Get Granular About This

Some mental images are really, really hard to shake.

The word "attempt" adds a lot more dimension to this tweet than it might otherwise have. But hey, let's not dwell on that for too long!

From a technical standpoint, this wouldn't be hard to pull off. All you'd need is a sound technician standing by, ready to flip the "mute" switch whenever Trump raised his hands to the mic.

On The Other Hand

Okay, Back To The Sex Jokes

Again, it wasn't just one or two people who drew a comparison between Trump's clapping and the sound of sexual intercourse. It was practically the entire Internet.

State Of The Union Or Adult Film?

Nothing wrong with some topical humor, right?

Another Way To Put It

Yup. It sounded like sex. Relatedly, "bumping uglies" is an excellent and underused euphemism.

"You Can Stop Clapping"

What's good about this tweet is that, thanks to the accompanying GIF, you can't help but hear it in Jonah Hill's voice.

Although the overwhelming consensus seemed to be that Trump's clapping sounded like two people having sex, a few observers suggested that perhaps, it sounded a bit more like, err, one person having sex.

Sound technicians across the country must have been growing more irritated by the moment during Trump's speech.

The State of the Union address was a helpful lesson any politician who might find themselves giving a high-profile speech in the near future: If you want your audience to listen to the substance what you're saying, turn to the side when you clap. Ears around the country will thank you.