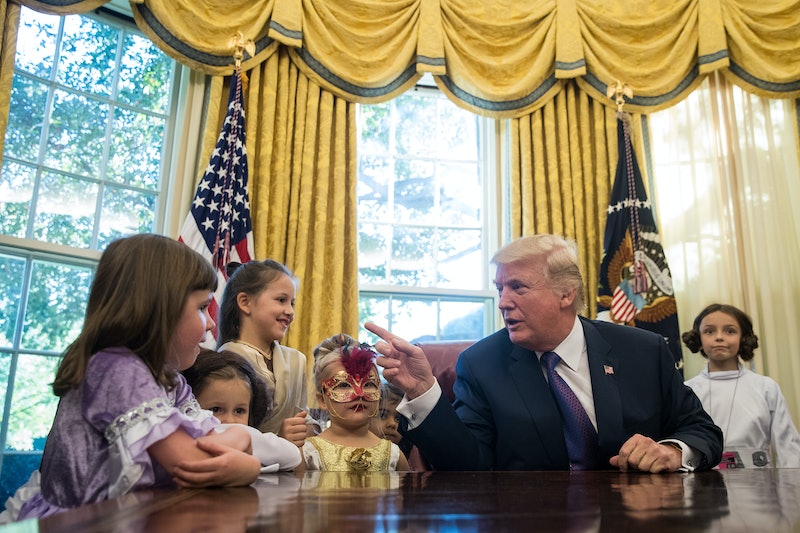 Ah, Halloween. It's that time of the year when you can humor the idea of ghosts, ghouls, zombies, and other terrifying-but-probably-not-real creatures. It's also the same time of the year when you can check out how the White House is commemorating the holiday. Over the past decades, the White House has celebrated Halloween in a variety of ways, the main feature being the president's interactions with costume-clad kiddos. This year, for the White House's Halloween celebration, President Trump joked with little trick-or-treaters about "weight problems" in a comment that raised many eyebrows.

"Well, you have no weight problems," Trump told the children. "That's the good news, right?" The children did what they do best when an adult says something peculiar: They just simply stared at Trump.

Trump's brand of humor is interesting, to say the least. It's the kind of comedy that some may or may not agree with. We'll get into other examples in a second. This little quip about weight was cracked on Friday eve when members of the press brought their little ones to the White House in different costumes to celebrate an early Halloween.

Dressed up as an assortment of fictional characters, from Star Wars figures to heroes in comic series, children were in the Oval Office with Trump for one of the year's coveted photo-ops: a spooky photo shoot with the president.

And spooky it was — at least, as far as the awkwardness was concerned. While the children barely responded to Trump's stash of weird jokes, the president threw several jabs at the media. Trump expressed his surprise that the children, whose parents are some of the journalists covering the White House, were so cute considering that their parents are members of the media.

"I cannot believe the media produced such beautiful children. How the media did this, I don't know," Trump said, alluding to his perennial feud with mainstream media figures and networks which he has frequently described as creators of the much-maligned "fake news."

The president then asked the kids how members of the media — their parents — were treating them. "How does the press treat you? I'll bet you get treated better by the press than anybody in the world," he said. But Trump's inside jokes with loaded reference material seemed to be lost on a group of neutral-faced and junior-sized Princess Leia, Darth Vader, witches, Batman, and Super Mario. It turned out that the kids didn't get his humor, or the anti-press sentiment.

The president also attempted to make personal connections with the little trick or treaters. While handing out Hershey's chocolate bars brought by press secretary Sarah Huckabee Sanders, Trump turned to one of the children and asked, "Do you know who they are? They're the friendly media. That's the press." After exclaiming that "these are beautiful, wonderful children," Trump went on to ask one young participant, "You gonna grow up to be like your parents? Hmm, don't answer. That could only get me in trouble, that question."

Trump's awkward exchange with the children has led to a flurry of responses on social media. Many pointed out that his comment about "weight problems" was directed at a little girl.

In spite of several attempts to get children to react to his humor, Trump found himself surrounded by somewhat unimpressed kids. But the festivities didn't end on Friday. On Monday, the White House will be celebrating Halloween by opening its South Lawn to civilian and military families and their children. An official statement from the first lady encouraged "ghosts and goblins of all ages" to take part in the celebration, while noting that there will be "bats and orange pumpkins with profiles of past presidents" on that day.