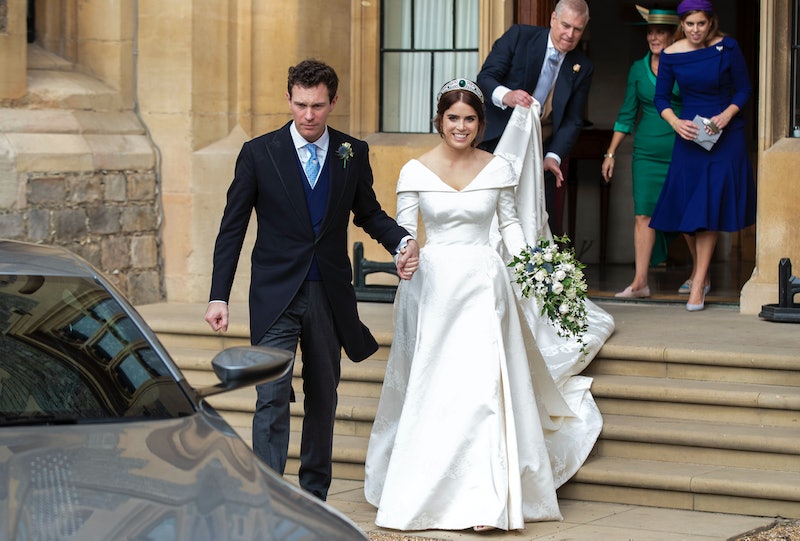 Perhaps it was because he had just seen the coverage the same day, but on Sunday, President Trump sent out a tweet that drew some sardonic responses from Britons. Trump congratulated Princess Eugenie on her wedding to Jack Brooksbank last Friday, The Hill reported, but social media users were quick to point out that the date was wrong.

"Princess Eugenie of York was a truly beautiful bride yesterday," Trump wrote on Sunday, mistaking the date of the wedding. "She has been through so much, and has come out a total winner!"

It's also unclear what Trump was referring to when he said that the princess "has been through so much." It's possible he may have been referencing her scoliosis, for which she underwent surgery when she was 12, according to The Hill. The medical condition can force the spine to misalign, giving the back a hunched appearance. Princess Eugenie was widely praised for wearing an off-the-shoulder, deep-V dress that revealed the scars on her back from that surgery.

Aside from that, though, British Twitter users swooped in on Trump's tweet, asking what Eugenie, who is ninth in line to the throne, had suffered through. Many claimed the princess has led a privileged life, The Telegraph reported.

Earlier this year, Princess Eugenie shared X-rays of her back, showing the impact of scoliosis on her spine. In an interview with ITV’s This Morning, she had stressed the importance of showing the world your scars.

“I think you can change the way beauty is, and you can show people your scars and I think it’s really special to stand up for that,” Eugenie said, according to The Independent.

Eugenie and Brooksbank said their vows at St. George's Chapel in Windsor Castle, the same location where Prince Harry and Meghan Markle, the Duke and Duchess of Sussex, got married in May.

Trump did not offer any sort of congratulations for the two at the time, and many were surprised that the president gave a particular tweet to Princess Eugenie. It does not seem like Trump knows Princess Eugenie or her parents, Prince Andrew and Sarah, the Duke and Duchess of York, nor has there been any documented accounts of the two ever meeting each other. Trump reportedly wanted to play golf with Prince Andrew at his Trump Turnberry course in Scotland when he visited the United Kingdom in July, but that never happened, The Telegraph reported.

Trump's history with the royals spans back decades to the '90s, when he had wanted a romantic opportunity with Princess Diana, the mother of Prince William and Prince Harry. According to CBS News, Trump's book, Trump: The Art of the Comeback from 1997 revealed the president's thoughts at the time: "I only have one regret in the women department — that I never had the opportunity to court Lady Diana Spencer. I met her on a number of occasions."

Princess Eugenie's wedding was a sweet and stunning celebration. But the criticisms and mockery arising from Trump tweeting something as seemingly innocuous as a congratulations shows just how controversial a figure he is.