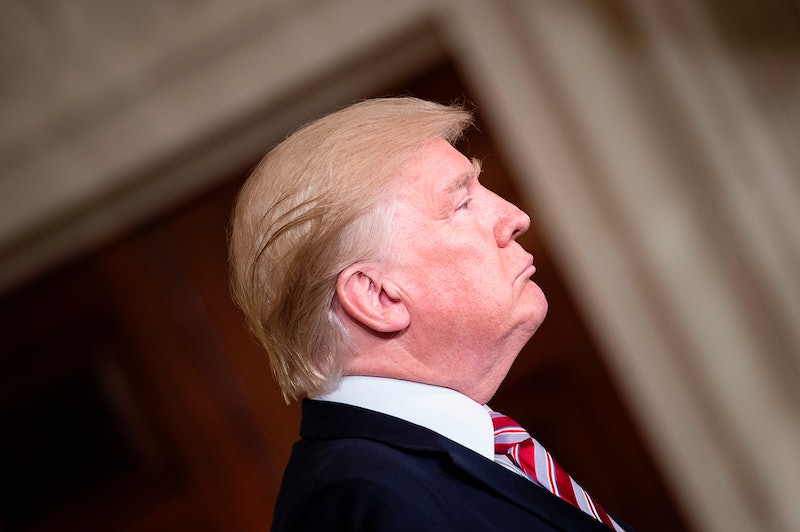 On Friday, during a rally in Alabama, President Donald Trump made news with some searing remarks towards professional athletes who've protested during the national anthem, the highest-profile of which is former San Francisco 49ers quarterback Colin Kaepernick. Standing in front of a crowd of supporters, Trump said NFL owners should say "get that son of a b*tch off the field" to players who protest during the anthem. And let's just say that's a harsher condemnation than he's had for some people, as this image about Trump's response to NFL players protesting racism pretty much says it all.

The image, tweeted out by Judd Legum of ThinkProgress on Saturday afternoon, puts some faces to the gap between how reluctant Trump's been to condemn even overt bigots and racists, versus how aggressively he's attacked high-profile anti-racist demonstrators like Kaepernick. On one side, a photo of the torch-wielding neo-Nazi demonstration that descended on Charlottesville, Virginia, in August, and on the other, a photo of Kaepernick and his former 49ers teammate Eric Reid kneeling during the anthem last year.

Each image bears a quote of what Trump said about them. On the torch-waving white supremacist demonstrators, who among other things chanted "Jews will not replace us" while marching in support of Confederate monuments: "Very fine people."

And on the image of Kaepernick and Reid quietly kneeling before a football game: "Sons of b*tches."

Back in August, after the torch-lit Charlottesville killed and several more were injured in a vehicular attack, Trump insisted that there were "very fine people on both sides" of the demonstrations. This response sparked widespread criticism and condemnation.

On Friday night, Trump said the following about Kaepernick, as well as any NFL player who's taken part in an anthem protest.

Wouldn't you love to see one of these NFL owners, when somebody disrespects our flag, to say "get that son of a b*tch off the field right now?" Out. He's fired. He's fired!

Whether he knows it or not, Trump called a whole lot more players than just Kaepernick a "son of a b*tch." As Sports Illustrated detailed late last month, a slew of players have followed Kaepernick's example in this early NFL season ― as of late August, the number stood at 14 during the regular season, and dozens more during the preseason, including a group show of solidarity by about 30 members of the Cleveland Browns.

Trump also implicitly insulted Kaepernick's mother, Teresa. In an interview with Deadspin, she said that sadly, this is basically what she and a lot of people have come to expect from Trump.

She also had the following response on Twitter, most definitely owning Trump's attacks against her, as well as her son.

It bears mentioning that Kaepernick remains unsigned and without a job this NFL season, despite having superior career statistics and achievements than multiple starting quarterbacks this year, to say nothing of backup quarterbacks.

It remains to be seen whether the impact of Trump's statements will be felt on game day, but based on some of the reactions from NFL players on social media, it seems as if he's set off a powder-keg with his attacks on their protesting brethren.

As such, it's possible you could see a series of escalating, even more overt protests before the slate of NFL games on Sunday, although needless to say, it's impossible to predict.