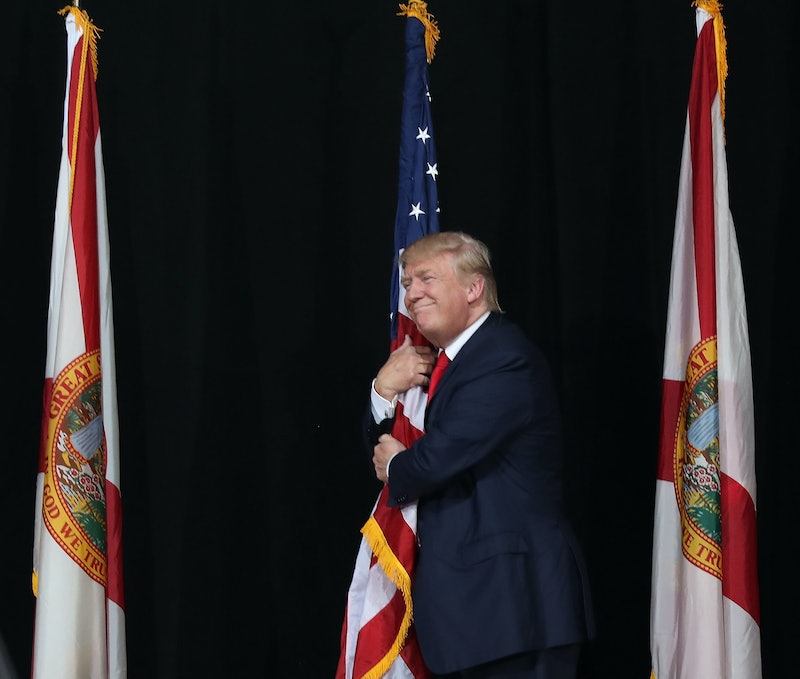 President Donald Trump asked Americans to reaffirm their allegiance to the United States' founding principals in a proclamation that caused a number of people on social media to flip out. In his proclamation, Trump called on Americans to "observe this day with appropriate ceremonies," including reciting the Pledge of Allegiance, and asked government officials to display the American flag on all government buildings and grounds. But while Trump's request may sound a bit Orwellian, the truth is there's no reason to freak out about Trump's Loyalty Day proclamation, as the holiday has been around for decades.

In an presidential proclamation issued Friday, President Trump declared May 1 as Loyalty Day and referred to the day as an opportunity for all those living in the United States to "pledge our dedication" to the country. "We pledge our dedication to the United States of America and honor its unique heritage, reminding ourselves that we are one Nation, under God, made possible by those who have sacrificed to defend our liberty," Trump's proclamation reads. "We honor our Republic and acknowledge the great responsibility that self-governance demands of each of us."

Trump is not, however, the first president to proclaim May 1 as Loyalty Day. In fact, the United States has observed the holiday since 1921, when it was known as "Americanization Day." The holiday was initially created as an attempt to counter growing radicalism the Russian Revolution had inspired in the U.S. labor movement.

In essence, the day was a direct response to the International Workers' Day celebrations promoted by communists, socialists, anarchists, and labor groups in Europe. In 1958, an act of Congress formally recognized May 1 as Loyalty Day, and the holiday has been recognized every year since via a presidential proclamation.

"To express our country's loyalty to individual liberties, to limited government, and to the inherent dignity of every human being, the Congress, by Public Law 85-529 as amended, has designated May 1 of each year as 'Loyalty Day,'" Trump's proclamation reads.

So while Trump's Loyalty Day proclamation is merely a continuation of a longstanding presidential tradition, what is most interesting is his focus on standing "against the threats of terrorism and lawlessness" and how "our Nation perseveres in the face of those who would seek to harm it." The president notes the United States is "the world's leader in upholding the ideals of freedom, equality, and justice."

In contrast, former President Obama's 2016 Loyalty Day proclamation centered on recognizing "we are strongest when we find in our diversity a deeper, richer unity" and noting the shared American identity stems from "our dedication to common ideals — rather than similarities of origin or creed."

More like this
'The Capture' Is Finally Back – & S2 Looks Tense AF
By Sophie McEvoy and El Hunt
The Lionesses Are Calling For Equal Access To Football In Schools
By Sophie McEvoy
Gassed Up Promises All Things Action, Risk, & Redemption
By Frances Stewart
UK Black Pride 2022 Just Broke A Major Record
By Sam Ramsden
Get Even More From Bustle — Sign Up For The Newsletter