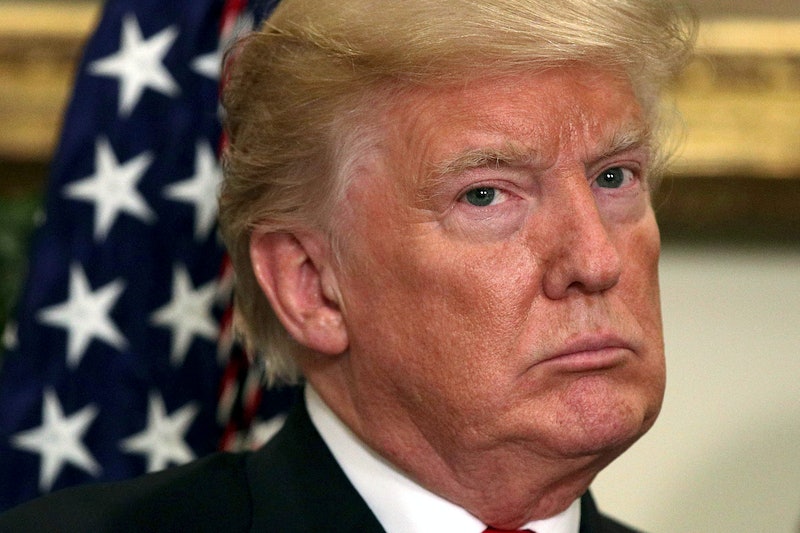 When a president tells a lie, it makes headlines. And because the list of lies President Donald Trump has told since taking office in January is — shall we say — long, his falsehoods have spurred a considerable number of headlines. But White House advisor Kellyanne Conway is pushing back on the news media's continued coverage of Trump's lies. In an interview with CNN's Reliable Sources, Conway argued it was unfair to blast the president for lying because Trump "doesn't think he's lying."

Conway appeared more than willing to get into it with Reliable Sources host Brian Stelter right from the start, kicking off her interview by accusing CNN of being "incredibly unfair" and "systematically against" Trump. Conway went on to criticize the news network for not covering the president's accomplishments and instead focusing on "non-stories" like Russia.

When Stelter pushed back, saying it was the media's job to cover the "big scandals" coming from the White House even if those stories might potentially cast the Trump administration in a bad light, Conway appeared shocked. She demanded to know what Stelter meant by scandals and accused him of tossing around "incendiary words" with the hope of getting clicks and "going viral."

"The scandals are about the president's lies," Stelter responded. "About voter fraud, about wire-tapping, his repeated lies about those issues. That's the scandal."

"He doesn't think he's lying about those issues and you know it," Conway fired back.

"A lot of husbands don't think they're lying when they cheat on their spouse and then say they're not," Stelter said. "Doesn't mean they're not lying.

"Oh, are you back to the Clintons now? What are you talking about? What kind of analogy is that?" Conway said.

More than a few of the president's remarks have been proven to be demonstrably false. Since taking office, Trump has, on multiple occasions, made erroneous claims alleging massive voter fraud robbed him of the popular vote despite the fact that no evidence of such widespread voter fraud has been found. In March, Trump boldly accused former President Barack Obama of having his "wires tapped" during the election. Although no evidence of a wiretap has been found, the president has never recanted or apologized for his claim.

But does the idea that Trump might not be aware he's telling a lie make his falsehoods OK? Apparently the White House seems to think so.