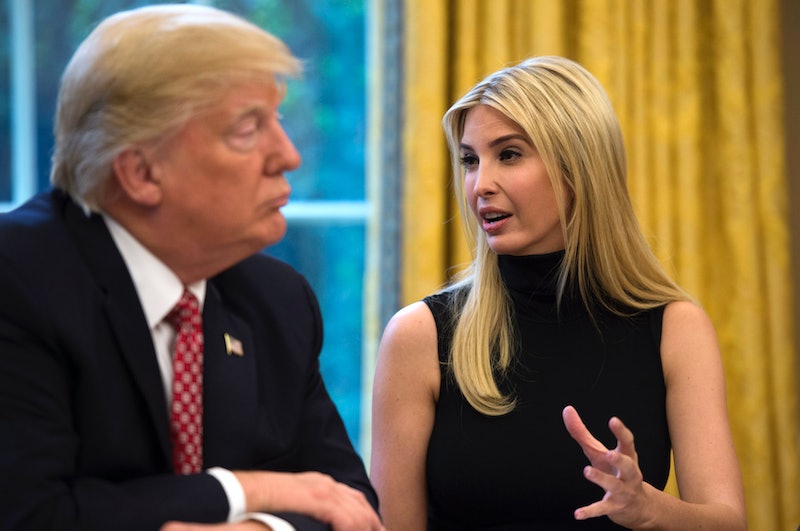 On Thursday, Donald Trump pulled the United States out of the Paris climate agreement, the international accord aimed at curtailing climate change. According to a Yale Program on Climate Change Communication poll released in May, the vast majority of Americans wanted the United States to continue participating in the environmental pact — including, reportedly, the president's own daughter, Ivanka. While many had seen hope in the first daughter as a moderating force that would keep her dad in line, Thursday's decision is the ultimate proof the country can't rely on Ivanka.

Up until the United States' decision on Thursday, only two countries in the entire world chose not to sign on to the agreement; Syria, currently embroiled in a Civil War; and Nicaragua, which felt the agreement actually didn't do enough to prevent climate change. The agreement aims to keep the global average temperature from rising more than 2 degrees Celsius above what it was before the Industrial Revolution, which scientists have indicated would mean irreparable damage to the planet. It asks countries to reduce their greenhouse gas emissions by massive percentages, as well as requiring richer nations to provide aid to poorer countries.

There was an assumption, stoked during the election, that among Trump's crew of advisers, Ivanka had the prime seat at the table. She has been not only his protege, but a trusted business ally for years. When she spoke, it seemed he listened. As The New York Times wrote, "Ms. Trump is her father’s all-around West Wing confidante, an adviser whose portfolio appears to have few parameters, making her among the highest-ranking women in a senior staff stocked almost entirely with men."

As John Oliver pointed out in a recent Last Week Tonight episode, Ivanka has often been thought of as the person moderates could count on to make sure her father didn't run the country aground. But her father's Paris climate accord pullout proves what Oliver also argued — Ivanka's influence and power cannot combat concerns about the president.

Perhaps cold comfort, but if Ivanka did, indeed, try to convince her father to keep the United States in the Paris climate change accord, she is not the only one whose advice he ignored. She may be in the good company of Pope Francis: The Washington Post reported that confidantes to Pope Francis were disappointed in the president's decision and that observers to their meeting last week believe the Pontiff had tried to convince Trump not to pull out of the Paris climate accord. Pope Francis gave the president a copy of his 2015 encyclical, which called for a cut to fossil fuel emissions when they met late last month.

But this environmental setback is a massive wakeup call for people who had pinned their hopes on Ivanka. If nothing else, it suggests she may not have the sway many believed she had on her father or there is a limit to her influence.

While it remains to be seen whether this was just an anomaly, perhaps Ivanka's opinion doesn't carry as much weight in the West Wing as many Americans had hoped.