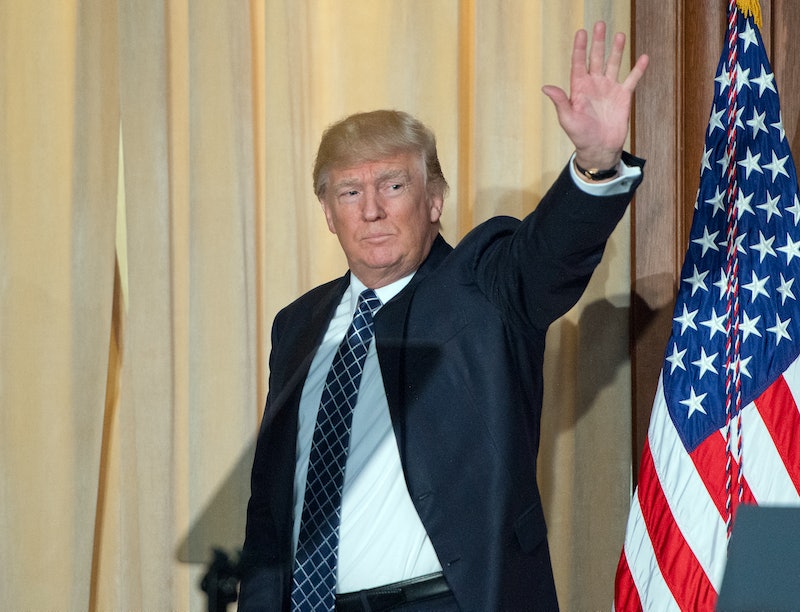 The man who once boasted of grabbing women by their genitals is now turning his attention to preventing sexual assault. Following in the footsteps of his predecessor, President Donald Trump proclaimed April "National Sexual Assault Awareness and Prevention Month" in a statement released by the White House on Friday.

"My Administration, including the Department of Justice and the Department of Health and Human Services, will do everything in its power to protect women, children, and men from sexual violence," President Trump said in his proclamation. "This includes supporting victims, preventing future abuse, and prosecuting offenders to the full extent of the law."

The president went on to say he had directed Attorney General Jeff Sessions to create a task force centered on crime reduction and public safety. "As a Nation, we must develop meaningful strategies to eliminate these crimes, including increasing awareness of the problem in our communities, creating systems that protect vulnerable groups, and sharing successful prevention strategies," Trump said.

President Trump cited statistics from the Department of Justice, which claim there are, on average, more than 300,000 instances of rape or other sexual assault that occur in the United States each year. "Behind these painful statistics are real people whose lives are profoundly affected, at times shattered, and who are invariably in need of our help, commitment, and protection," the president said in his proclamation.

Trump is not the first president to proclaim April National Sexual Assault Awareness and Prevention Month — that distinction goes to former President Barack Obama in 2009. Since then, it has become tradition for the president to issue a proclamation regarding the month's dedication each year along with a statement in support of the cause.

What makes Trump's proclamation of April as National Sexual Assault Awareness and Prevention Month particularly newsworthy are his comments about touching or kissing women without their consent and the multiple women that have accused him of sexual assault, inappropriate, or lewd behavior over the years. According to The Hill, Trump has also been involved in multiple sexual assault lawsuits.

"At the heart of our country is the emphatic belief that every person has unique and infinite value. ... Women, children, and men have inherent dignity that should never be violated," Trump said in his proclamation. "We recommit ourselves this month to establishing a culture of respect and appreciation for the dignity of every human being."