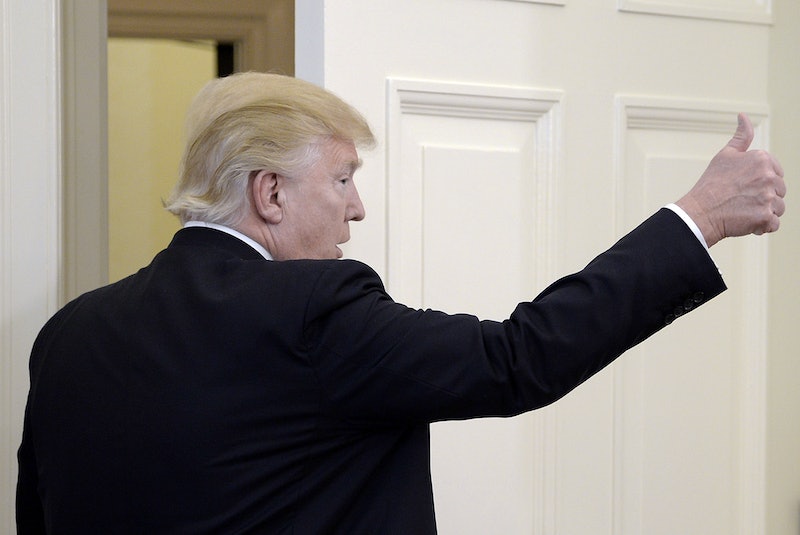 The first three months of President Donald Trump's administration have been full of surprises. Trump made good on some of the promises he made to voters during the campaign and failed at others. He's appointed staff, signed executive orders to quickly establish his own legacy, and run into his share of controversies. In yet another interesting move, Trump gave up his first quarter salary to the National Parks Service (NPS), White House Press Secretary Sean Spicer announced at Monday's daily press briefing.

Trump, who emphasized throughout his campaign that he already has a great amount of money thanks to his incredible business deals, pledged that he would not take the $400,000 presidential salary if he were elected. Last month, Spicer announced that the press corps would determine where Trump would donate his salary at the end of the year, but apparently that plan changed.

Spicer handed the $78,333.32 check to Interior Secretary Ryan Zinke, who declared the money will go toward restoring the nation's battlefields. It's interesting that Trump decided to go with the National Parks Service as the recipient of the money, considering the Interior Department's budget was cut by 12 percent at the beginning of his presidency.

Trump also clashed with the NPS right after his inauguration when he repeatedly talked about the size of the crowd. And, as people began comparing his crowd size to that of former President Barack Obama's, the NPS Twitter account retweeted a tweet that showed pictures of Obama's and Trump's inauguration crowd side by side.

Shortly after the tweet was posted, Trump's administration asked the NPS to temporarily stop using the account except in the case of public safety, allegedly over fears that it was hacked. The next day, the account was active again, and the NPS issued an apology tweet. The NPS traditionally does not comment on inauguration crowd size. Still, the tension between Trump and the NPS has been noticeable, which makes the donation a curious thing.

My guess is as good as yours when it comes to what other agencies Trump plans to give his salary to throughout this first year.

More like this
Taylor Swift, Kerry Washington & More Speak Out On Uvalde Mass Shooting
By Jake Viswanath
The Church Of Scotland Votes To Allow Same-Sex Marriages
By Sam Ramsden
Photos Of Boris Johnson Drinking At A Downing Street Lockdown Party Have Surfaced
By Bustle UK
10 Times Diana & Meghan Spoke Similarly On The Royal Family
By Sophie McEvoy
Get Even More From Bustle — Sign Up For The Newsletter