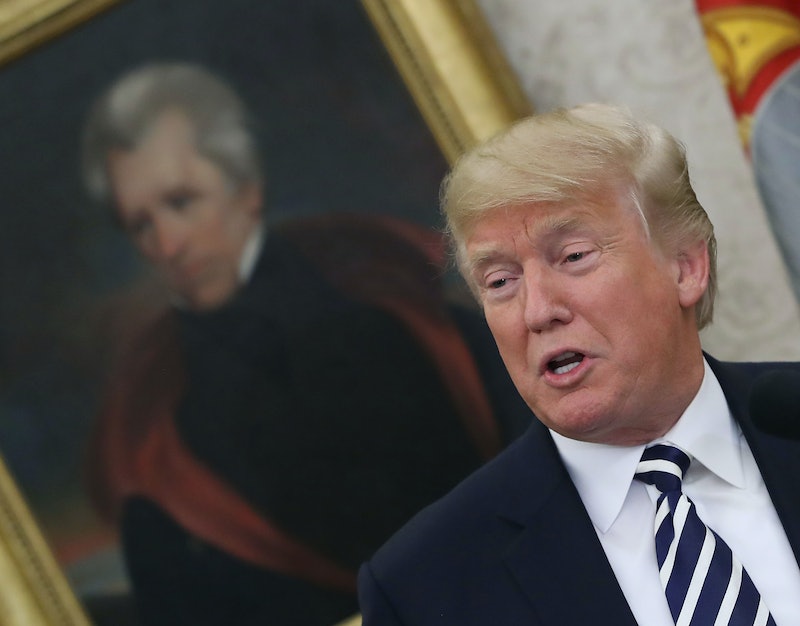 President Donald Trump is often a bit sullen during meetings in the White House, The Washington Post reports, but his demeanor changes as soon as he suggests that visitors take a look around the West Wing. According to a new report in the Post, Trump relishes giving White House tours and tends to include some pretty unusual spots.

"I'm told this is where Bill and Monica..." he reportedly told a TV anchor during a 2017 tour, referencing the location where President Bill Clinton and Monica Lewinsky are supposed to have begun their affair (Clinton admits to having had "inappropriate intimate contact" with his one-time intern). According to the Post, he often points out that spot, as well as the bedroom of President Abraham Lincoln (with a bed that was too small for someone of Lincoln's height, he typically says) and his own private dining area, which he claims was in "rough shape" before he made renovations.

Time has previously reported on Trump's White House tours and made a video partially documenting one that the president spontaneously gave some of the magazine's journalists in May 2017. "This is a sort of unusual level of access for anyone, reporters included," Time reporter Zeke Miller noted of the experience, "and it speaks to how the president likes to use the powers of pageantry to achieve his aims."

Trump enjoys adding some digs at President Barack Obama into his tours, per the Post. He claims that the dining room wall had a hole in it when he arrived (a former White House official told the Post that this isn't true). Obama "just sat in here and watched basketball all day," Trump reportedly told one group. Then he mentioned that he'd replaced the room's old TV with a massive new one.

More so than past presidents, Trump has put a lot of effort into renovating parts of the West Wing and adding new artwork, according to the Post. Some art pieces have received high media attention during his tenure, including a painting of him having drinks with former Republican presidents. Images of the work went viral after people noticed it in the background of a 2018 interview he gave with 60 Minutes. Artist Andy Thomas created the painting, which portrays Trump sipping a diet coke alongside Richard Nixon, Abraham Lincoln, Theodore Roosevelt, and others. It appears to show Trump making a joke and causing the former presidents to laugh.

Trump has redesigned parts of the Oval Office as well, for example, by adding gold drapery and couches (he often opts for golden decor). He ordered a portrait of President Andrew Jackson to be hung behind his desk. The president is known to be fond of Jackson, who is infamous for causing the Trail of Tears and strongly supporting the enslavement of black Americans. Trump has also added many statues of eagles to parts of the West Wing, according to The Guardian.

"Cosmetic updates happen with the transition of each new administration, of course," former White House official Cliff Sims writes in his new book Team of Vipers, according to the Post, "but I doubt any president has ever been as hands-on as The Donald."