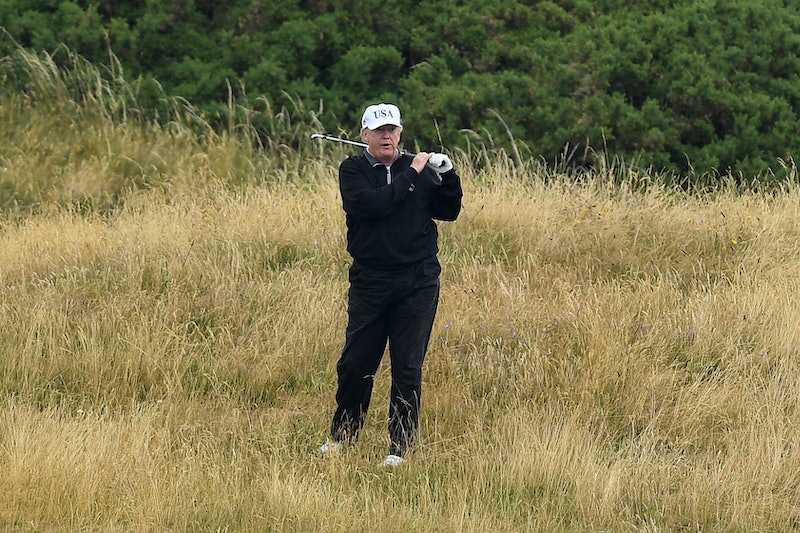 Yet another book detailing anecdotes from the Trump presidency is about to come out, and it's already clear that this one contains some gems. Sportswriter Rick Reilly conducted interviews about the commander-in-chief's golfing habits and detailed a reported incident in which President Donald Trump hit himself with a golf club, then suggested it was his caddy who did it.

Reilly learned of the incident from A.J., Trump's 60-something caddy who is a former Marine and an apparent big fan of the president. Reilly interviewed A.J. over a full game of golf and reports that the caddy had nothing but praise for Trump. "To hear A.J. tell it, Trump has Einstein's brain, Lincoln's wit and Nightingale's heart," he writes in his new book, Commander in Cheat: How Golf Explains Trump, from which Politico published an excerpt on Thursday.

"A.J. is smart that way," Reilly continues. "A loyal caddy can go a long, long way with Donald Trump." That's certainly been true in the past: Dan Scavino, who currently serves as a presidential assistant and the White House Director of Social Media, used to be a caddy for Trump.

But there was at least a brief moment where A.J. reportedly slipped out of Trump's good graces. As the caddy tells it, the president once bonked himself in the head with a club and then tried to foist away the blame.

"One time, after a bad drive, Trump slammed his driver back in his bag, as guys will do, and wasn't really watching what he was doing, and the driver ricocheted back and hit Trump in the head," Reilly writes, according to the excerpt in Politico. "'A.J.?' Trump asked, pissed. 'Did you just hit me in the head with my own driver?'"

Trump, who's been an avid golfer for years, has continued playing regularly since becoming president. The website Trump Golf Count reports that he has visited golf clubs 161 times since his inauguration and played games on at least 75 of those trips. This is, of course, despite the fact that he used to criticize President Barack Obama for golfing.

"I'm going to be working for you," Trump told a rally audience in August of 2016, according to Salon. "I'm not going to have time to go play golf."

Many Trump critics have castigated the president for this, calling him hypocritical. But there's one person for whom Trump can seemingly do no wrong: A.J. The caddy told Reilly that he even got physically violent with another caddy who'd been insulting Trump at the 2017 Senior PGA Championship.

"'He was running his mouth, sir,'" Reilly quotes A.J. as saying. "'Yellin' about Mr. Trump. He was sayin' to somebody, Don't tell me how I have to feel about him! I hate that motherf*cker!'"

A.J. then reportedly put the caddy in a "full military chokehold" and yelled, according to the excerpt:

Now, you listen to me, f*cker! You're not gonna come to Mr. Trump's course and eat Mr. Trump's food and then use the word "hate" about my president. I won't have it, you got me?

Reilly has written about Trump in the past. His 2003 book Who's Your Caddy described a round of golf that he personally caddied for the real estate mogul, according to USA Today. Commander in Cheat, Reilly's new book, is currently set to be released on April 2.