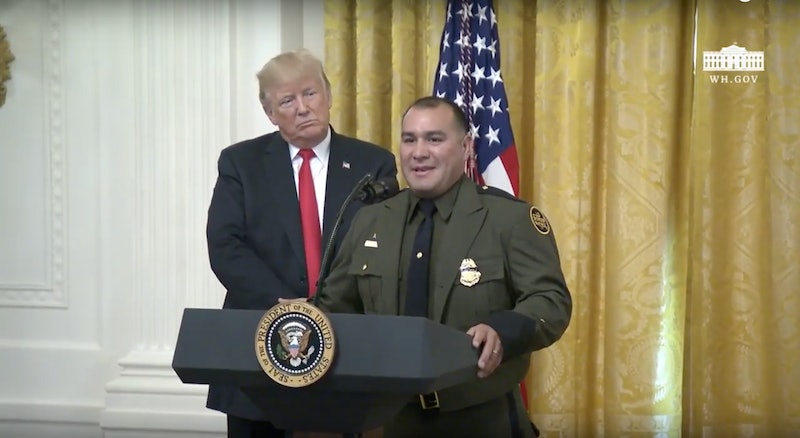 If it were a one-off, without any history of racially-offensive speech, the incident might not have attracted so much attention. But on Monday, during a tribute to the law enforcement officers of Immigration and Customs Enforcement (ICE) and Customs and Border Protection (CBP), Trump praised a Latino border officer's "perfect English" while introducing him, Vox reported. The praise is enough to raise questions on what Trump's assumptions are regarding people of Latin descent in the United States and what an "American" looks like to him.

While Trump was on stage, he honored field and front-line agents for enforcing his zero-tolerance policy. The president shared the story of an agent who discovered dozens of undocumented immigrants locked in the back of a refrigerated truck in Laredo, Texas. As Trump called for the Border Patrol agent named Adrian to come up to the podium, he said to the rest of the room that the agent "speaks perfect English."

"Adrian, come here, I want to ask you a question. So — how did you — Come here, come here. You’re not nervous, are you?" said Trump, before turning to the crowd. "Speaks perfect English."

The issue is twofold: The optics matter here, and in clarifying that a Latino agent's English language skills are up to par rests on the assumption that most Latinos don't speak English well. It reinforces the notion that nonwhite people aren't really Americans — or, at least, until they open their mouths and prove it. Trump has a rough history with Latinos and has been accused of dehumanizing their community. The other issue is one to mull over: If the agent had been white, would Trump have made the same comment?

The comment caught the attention of people around the world, with the creator of Harry Potter even chiming in.

One Guardian reporter spotted the problem with the comment right away.

One user directly pointed out the link between the comment and the agent's race.

Another pointed out his citizenship status in working as a federal government employee.

There there was the CNN national security analyst who straight up called the comment "stupid."

Another turned the comment back on Trump, referencing his frequent misspellings and grammatical errors in his tweets.

One radio host heaped on the sarcasm, marveling at Hispanic people who possessed the ability to speak unaccented English.

Some Twitter users also couldn't help but take a jab at the president's wife.

The tribute to Homeland Security's ICE and CBP was meant as a political move, according to Vox, that the Trump administration is hoping will pay off soon in November's midterm elections. The success stories about apprehending human smugglers and fighting crime are a reminder of the president's hardline stances and why the GOP insists voters should support it at the voting booths. But between the "perfect English" comment and Trump's insistence on calling the CBP the "CBC" (to everyone's confusion), his political strategizing this time around may be a wash, as his message on zero-tolerance immigration gets overshadowed by the attention on his misguided comment.