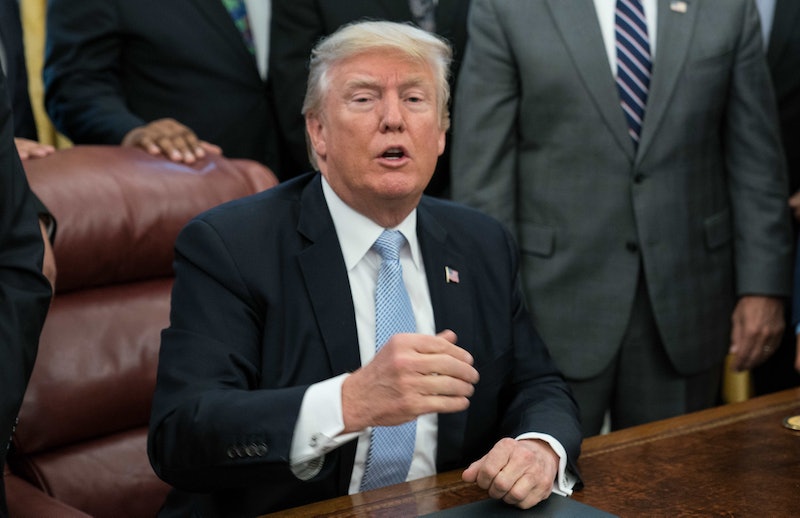 According to a new report from Politico published Sunday, Donald Trump will end the DREAMer program, also known as the Deferred Action for Childhood Arrivals or DACA. The program allowed undocumented Americans who came to the country as children to register with the government and be exempted from deportation. Now, 800,000 DREAMers may be subject to forcible removal from the country, despite often 10 or more years of residence in the United States.

According to Politico's sources, there is still some leeway within the bureaucratic process for the program's repeal to fall through, or DACA could be saved by Congress. "White House aides caution that — as with everything in the Trump White House — nothing is set in stone until an official announcement has been made," the report read. The White House is also waiting six months before enforcing the ruling within the executive branch, in the hopes that Congress will create more formal immigration law in the interim.

President Obama created the DACA program via executive order in 2012, granting undocumented persons who came to the United States before the age of 16 legal rights to work and study in the country. There are numerous conditions for qualification, including a minimal criminal record and a continual residence in the U.S. for at least five years, but nearly 800,000 DREAMers have registered for the program since its inception.

That means almost a million people, many with jobs, spouses, and children, now suddenly find themselves at risk for deportation. Now they're "in panic mode," according to Reaz Jafri, an immigration attorney at the law firm Withers Bergman, which represents DACA recipients and their employers.

"DACA invited people who were in the shadows to come forth, get biometrics taken, get put in the system, get a social security number, get a job, take out a loan, open a bank account, get a credit card," Jafri told Business Insider in an interview. "They're wondering, 'Now that I'm no longer protected, can ICE now come and find me? Because ICE now knows where I live, where I work.'"

The economic effects of DACA ending could also be debilitating. According to a survey conducted by the University of California, San Diego, 97 percent of DACA enrollees are employed or enrolled in school. The study found that ending the program could cost the economy $460 billion in lost GDP, just over the next decade.

Thousands have already rushed to social media to denounce Trump's decision, indicating that the White House could face an uphill fight against public disapproval. A recent NBC News poll found that 64 percent of Americans support DACA, and with many personal connections to the program and its enrollees, there could be massive shows of public support in the next few months to save the program.