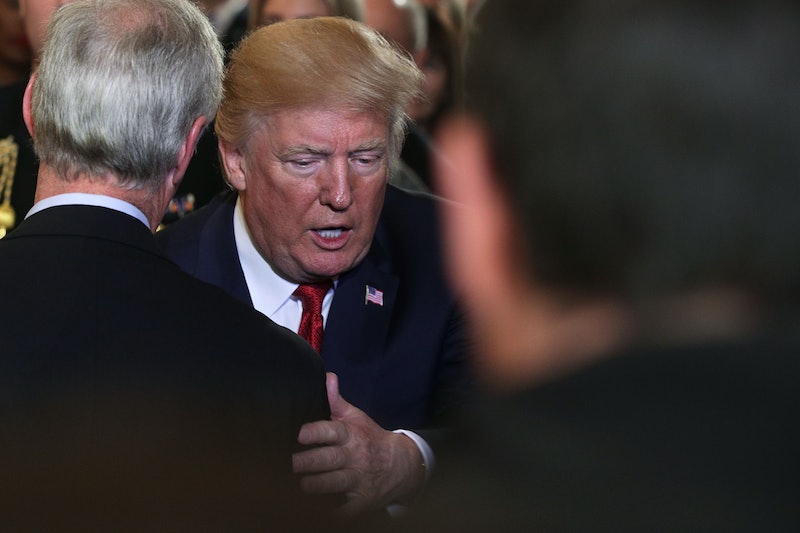 On Monday, just hours after President Trump’s former campaign chairman Paul Manafort and Manafort's business associate Rick Gates were indicted, Trump's campaign team sent out a fundraising email asking supporters for donations, despite recent reports that the president might not even run for re-election, according to MSNBC. Both Manafort and Gates are pleading not guilty to the multiple charges, which include money laundering and conspiracy.

The email, entitled "Still Standing," and written by Trump's son, Eric Trump, asked people to donate "just $1" to "help crush our goal this month." Although the email made no direct mention of the Manafort indictment, it referenced the "new opposition against my father and this Administration every day."

The email also tried to appeal to Trump's supporter base.

There’s new opposition against my father and this Administration every day. The mainstream media continues to play politics, creating division and turning the American people against one another.

But as a loyal supporter of our movement, I know you know the truth.

My father has spoken out time and time again against those who have tried to bring this country down, and will always do so to protect hardworking Americans whose values have been forgotten by Washington.

... We’re working to change the course of this country for the better. My father will always stand for what is right, Friend, and hopes you will too.

But on Oct. 29, Senator Rand Paul told MSNBC that people should not assume that Trump is running for re-election, despite Trump having raised $36 million for a 2020 campaign, according to Vox. “I think no one can stop primaries from happening and there could well be a primary that happens,” Paul told MSNBC. “Before you even get to that, you need to know, is President Trump running for reelection? I think you won’t know that until you get into sort of — second, third year of his presidency."

New Jersey Governor Chris Christie also told the Today Show's Matt Lauer on Oct. 27 that he wasn't sure that Trump will run another campaign. "If he runs again I would support him, yes, but I'm not so sure what will happen," Christie said. "Four years is a long time, and especially for someone who has not spent a lifetime in politics, so I think those years affect him differently. So I'm sure the president will make whatever decision is best for him and his family and the country.”

Doubts surrounding a Trump re-election campaign aren't anything new though. On the heels of the ongoing Russia investigation in August, the New York Times interviewed over 75 Republican elected officials, donors, and strategists, who were uncertain that Trump would be on the ballot again in 2020. “Look, it’s not a nice business we’re in," Arizona Senator John McCain told the Times.

At the same time, however, outlets like Politico have published stories about Trump's re-election strategy, suggesting Trump isn't pulling out of the game anytime soon. While it's true he could change his mind after a few more years, he hasn't hinted any change of heart so far. On top of that, Trump is still holding "rallies" months after he moved into the White House.

Perhaps Trump's fundraiser email is just another attempt to downplay the legitimacy of the Russia investigation, which the president has dubbed a "witch hunt." Maybe it's meant to convince the public that the charges are a blatant attack on his administration — or another example of fake news. Either way, it looks like Trump is trying his hardest to use the indictment as a bizarre opportunity to prop himself up. Whether or not it works will be another story, as the president's approval rating plummets.