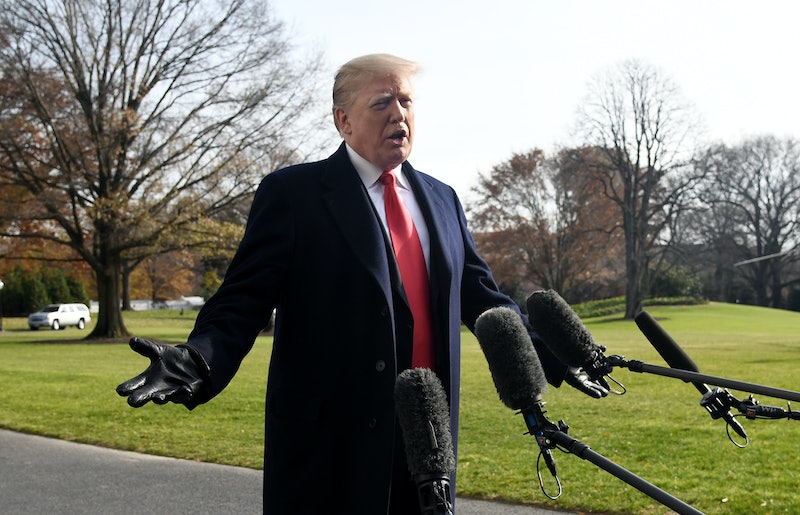 It has been nearly two years since Donald Trump assumed the presidency, and in that time, numerous investigations and lawsuits have been launched against him. As a result, Trump is reportedly worried about impeachment, per NBC News, despite publicly claiming that it is not a viable concern. Bustle has reached out to the White House for comment.

According to The Washington Post, special counsel Robert Mueller's Russia investigation is not the only legal threat that Trump is currently facing. His private company is dealing with civil suits, while his charity is engaged in a lawsuit with the state of New York. Mueller has also been investigating Trump's inaugural committee for illegal foreign donations, The Washington Post reported.

This month, Trump's concerns about impeachment reportedly escalated when his former longtime lawyer, Michael Cohen, was sentenced to three years in prison. According to NBC News, Democrats have said that court filings in Cohen's case could be used to move impeachment proceedings forward against Trump.

CNN reported earlier this week that White House officials still don't believe that Mueller's investigation will lead to impeachment. However, an unnamed source reportedly told CNN that Trump nonetheless sees impeachment as a "real possibility" — though he is not convinced that impeachment proceedings would make it through the GOP-controlled Senate.

NBC News reported that one of the latest events prompting Trump's impeachment concerns took place earlier this week, when the company that publishes the National Enquirer admitted that it had made a $150,000 payment to silence a woman who alleged that she had an affair with Trump. The company, American Media Inc., reached an agreement with prosecutors on Wednesday in order to avoid legal repercussions. AMI said that it was working with Trump's campaign when it made the payment to former Playboy model Karen McDougal in 2016, in order to prevent her story from influencing the election.

Alleged financial fraud and hush-money payments could be the main issues propelling any impeachment proceedings against Trump, according to CNN — namely, Cohen's payouts to McDougal and adult film star Stormy Daniels. Cohen's allegation that Trump directed him to make the payments could constitute an impeachable offense if proven accurate, according to New York Rep. Jerry Nadler.

Earlier this week, Trump publicly claimed during a White House interview with Reuters that he was not remotely worried about impeachment. In fact, he said that “the people would revolt if that happened," and argued that Cohen's payments did not violate any campaign finance laws.

"It’s hard to impeach somebody who hasn’t done anything wrong and who’s created the greatest economy in the history of our country,” Trump told Reuters.

Sources close to the president, however, reportedly told NBC News and CNN that he is privately concerned, especially as the lawsuits and investigations against him continue to escalate.