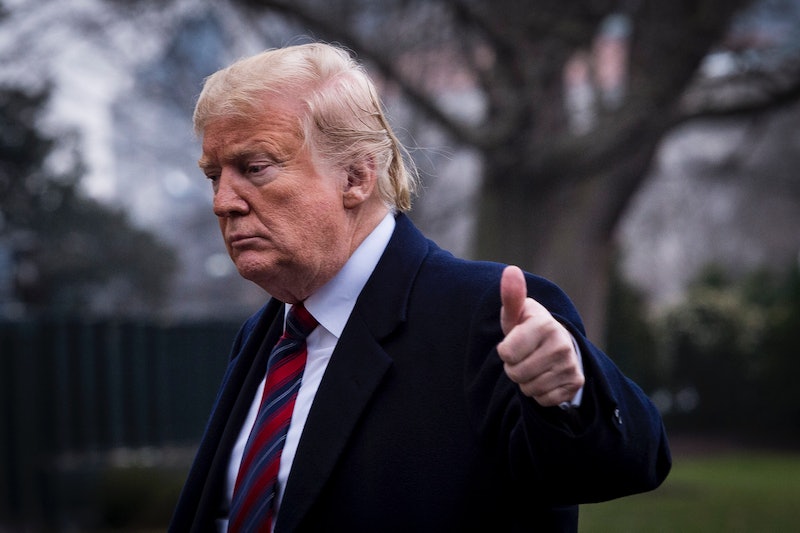 President Trump took a break from the shutdown fight over the border wall to tweet about the weather. Though that may sound mundane, it wasn't. Trump joked about the winter storm and global warming, implying again that he doesn't believe in the human role in climate change. Climate journalists quickly set him straight, pointing to words of an expert from the Obama administration.

Trump's comments were in reference to the winter storms that have hit the Midwest and are heading to the east. "Be careful and try staying in your house," Trump wrote. "Large parts of the Country are suffering from tremendous amounts of snow and near record setting cold. Amazing how big this system is. Wouldn’t be bad to have a little of that good old fashioned Global Warming right now!"

Nearly like clockwork, climate journalists started tweeting a New York Times piece from the last time the president tweeted such a thing in December 2017. "Every. Time. It. Gets. Cold. Well, Mr. President, here ya go. Again," wrote John Schwartz of The Times with a link to the older story.

In it, Todd Stern, President Barack Obama's climate change envoy, explained why cold weather is not the same as a warming climate. "Of course it sometimes gets very cold," Stern told the paper. "Five minutes’ worth of education would tell you that what matters are global averages, and those are going implacably up."

There were a large number of climate journalists that pointed to the same article to provide the scientific context for Trump's tweet. The president has told 60 Minutes that there's probably a difference in temperature but that he doesn't "know that it’s manmade." Trump's also against investing "trillions and trillions" in green energy.

He has tweeted about weather and used it to spin climate change before, just before the shared article was written. "In the East, it could be the COLDEST New Year’s Eve on record," Trump wrote in December 2017. "Perhaps we could use a little bit of that good old Global Warming that our Country, but not other countries, was going to pay TRILLIONS OF DOLLARS to protect against. Bundle up!"

This time, the answer was the same. "Time to trot this article out again!" tweeted The Times' Jonathan Ellis, while Brian Kahn, a Columbia University professor and reporter for Earther, wrote, "Love that Trump tweeting about good old fashioned global warming is becoming an annual occurrence."

If Trump wanted to spend "five minutes' worth of education" as Stern, the Obama envoy, suggests, there is a NASA website that he could use a resource — and so can you. It details the key differences between climate and weather. Weather is talking about the changes in the atmosphere that are short term, from minutes to months, where as climate is the "average of weather over time and space."

The U.S. government released a report on climate change last year that showed if things continue without any change, the result could be catastrophic. Economic impacts could result in the total U.S. economy shrinking by some 10 percent, and millions of Americans could be affected by growing natural disasters like wildfires.

Global warming may not be preventing the huge snowstorm, but you can bet that's not the end of unpredictable weather this year.