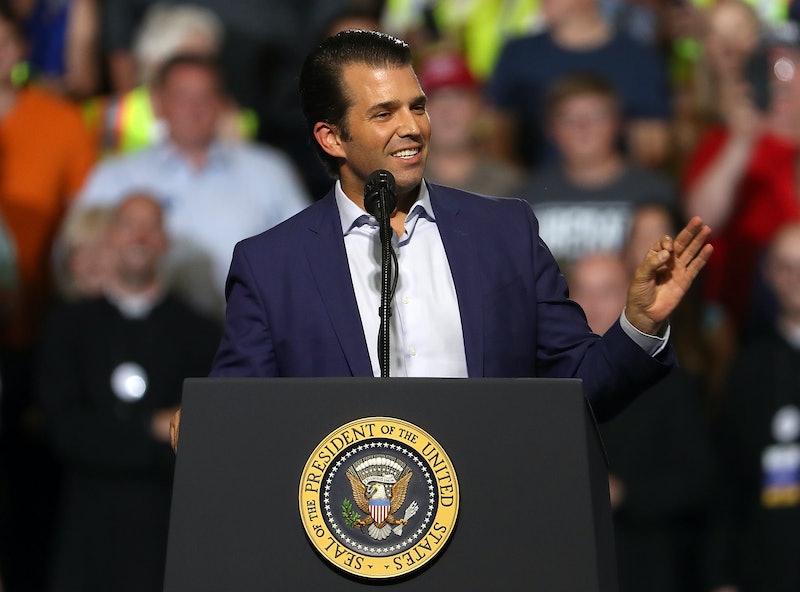 The first family's security costs are continuing to soar. According to a report by The Washington Post on Friday, Donald Trump Jr.'s business trip to India cost taxpayers at least $32,135.

The Post breaks down the bills for the Mumbai and Pune legs of the trip:

A review of General Services Administration purchase orders shows that the government paid $15,166 for rooms for “Don Jr Visit to Mumbai” and another bill for $3,501, as well as $13,468 for hotels in the western Indian city of Pune, for a total of $32,135.

The newspaper also found a third purchase order for Trump Jr.'s stop in Kolkata, India. The purchase order cited a "VIP visit," which cost $9,880. The Washington Post did not report the identity of the VIP.

In February, Trump Jr. took a weeklong trip to India to promote the family's real estate properties. Before the trip, the Trump Organization took out front-page newspaper ads advertising a "conversation" with the president's son for those who purchased a "booking fee" apartments in the luxury complex, according to Slate.

Catherine Milhoan, a spokeswoman for the Secret Service, told The Washington Post that, "As a matter of practice, the U.S. Secret Service does not comment on the specifics of protectees' trips."

At the time, Trump Jr. framed the trip as a business-only excursion. "I'm here as a businessman. I'm not representing anyone," Trump Jr. said in February, according to the Post.

Kopp's FOIA submission is requesting the number of and the job description of Secret Service agents who accompanied Trump Jr. to India, the cost of the traveling with these agents, including "transportation, meals, lodging, salaries," and Kopp requested "any rules" about the duties of agents traveling on the trip, according to the lawsuit.

"There's been a wholesale use of taxpayer assets by the Trump family, led by the president of the United States," Kopp said at a press conference, according to KPIX. "It's almost as if he's acting in the true form of a crook — to take taxpayer money and to use it for private business. I'm a taxpayer. I resent it."

According to the lawsuit, the Secret Service said Kopp's FOIA request was "too broad in scope" for the agency. "As you have failed to reasonably describe the records you are seeking, your request is not a 'perfected request,' and we are unable to initiate a search for responsive records," the agency wrote in its reply.

Kopp was told to refile his FOIA request within 30 days, but he continued to go back and forth with the agency about the scope of the FOIA request, according to the lawsuit.

When the Chronicle asked for comment, Secret Service spokesman Mason Brayman told the paper that the Secret Service does not comment on pending litigation.

Kopp's attorney told the newspaper "taxpayers deserve to know" how money is being spent on the adult Trump children.

"Taxpayers deserve to know where their money is being spent and why their money is being spent to protect the adult son of the president on a trip designed solely to support the interests of the Trump organization," Justin Berger, a lawyer for Kopp, told the newspaper. "This is the first step in that process, in determining what's been violated and how it's been violated."

Kopp said that he plans to file other FOIA requests about similar activists relating to the Trump family and taxpayer money.