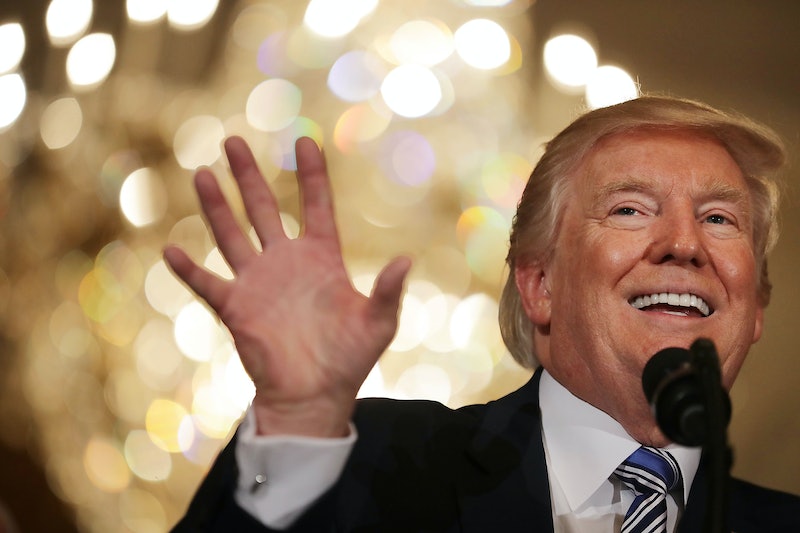 In the last month alone, more than 81 different pregnancy prevention programs received letters revealing Donald Trump's plan to cut funding to teen birth control education and studies. The letters from from the Department of Health and Human Services said that the programs' five-year funds, promised by the Obama administration until June 2020, would be cut instead by June 2018. In total, this means the teen pregnancy initiatives will lose $213.6 million of previously anticipated funding.

According to a report from Wired, when teen pregnancy research and prevention programs across the country received their letters, the HHS informed them, "This award also shortens the project period to end June 30, 2018, and the end of this budget year."

While the detailed services of the programs themselves vary by state and city, the initiatives facing federal defunding include necessary services such as STI testing, comprehensive sex education, classes briefing parents on how to broach topics of sex with their teenagers, as well as research programs focused on reducing the teen pregnancy rate in the U.S.

The five year grants were originally awarded by the Obama administration in 2015 as a move to bolster research into scientifically supported methods to reduce unwanted teen pregnancy. In 2015 alone, America's teen birth rate dropped 8 percent, according to findings from the Centers for Disease Control and Prevention.

In the following year, a study from the Centers for Disease Control and Prevention revealed that the teen birth rate declined 1 percent in 2016, which, in combination with 2015, marked a record decline of 9 percent within a year's time.

While there are reasonable concerns that impending cuts to these programs, combined with pervasive abstinence-only sex education will halt or slow the country's steady decline of teen pregnancy, some researchers already saw this as a grim possibility.

Luanne Rohrback, an associate professor of medicine at the Keck School of Medicine at USC, has been working with a $10-million grant to provide educational outreach to at-risk teens in South Los Angeles and Compton. She told the LA Times that she suspected funding might be cut, but anticipated a period for discussion and appeal.

"We’d been expecting that funding could be cut. But we didn’t think it would happen this way, and expected that there would be discussion about it. We thought there would be an opportunity at least for the program to be deliberated," said Rohrback.

By no coincidence, the decision to defund these programs came into play after Trump appointed Valerie Huber as the head of the Office of Adolescent Health. Throughout the years Huber has been an outspoken advocate for abstinence-only education, and even served as the CEO of the National Abstinence Education Association.

In 2016, she clearly stated her views on sex education to PBS, "As public health experts and policymakers, we must normalize sexual delay more than we normalize teen sex, even with contraception," wrote Huber.

The cuts in teen federal funding for teen pregnancy prevention programs are written into Trump's White House Budget Proposal for the 2018 fiscal year. On top of cutting grant money, the budget would also funnel $277 million into abstinence-only education.