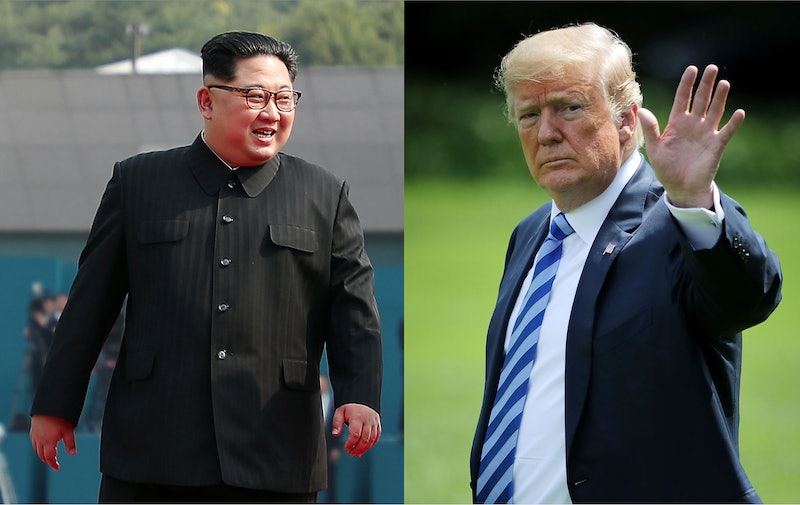 Donald Trump is getting ready to make history as the first-ever American president to meet with the leader of North Korea, and he's showing confidence ahead of the Tuesday morning sit-down in Singapore. But experts warn that negotiations with North Korean leader Kim Jong Un over the country's nuclear weapons arsenal are sure to be thorny, and that there are plenty of issues that could complicate the former real estate tycoon's biggest deal to date.

Bustle spoke with experts who had a lot of advice they say could be useful when navigating the tricks and traps that might arise during the Donald Trump & Kim Jong Un summit. Here are eight problems that could come up and how Trump can avoid them:

You Should Not Be Aiming For The Nobel Peace Prize

The idea of striking a deal to get North Korea to abandon its nuclear weapons program is tantalizing — so much so that Trump openly mused about winning the Nobel Peace Prize for his efforts. But experts warn that looking for a fast resolution and a pat on the back is the wrong way to go about negotiations.

"I think the thing that's most dangerous about the upcoming summit is that people might expect things to happen too fast," Kathy Moon, professor of political science at Wellesley College and nonresident senior fellow at the Brookings Institution, says to Bustle. "This is Mr. Trump's weakness. He likes to go big, but this... will be pretty painstaking and will require years, not months."

"This is Mr. Trump's weakness. He likes to go big, but this... will be pretty painstaking and will require years, not months."

Trump, meanwhile, is just a bit more than 500 days into his first term and starry-eyed about the prospect of a Nobel Peace Prize.

“Everyone thinks so, but I would never say it,” Trump said in response to a question on whether he deserved the prize, after a group of 18 House Republicans formally submitted his nomination. “The prize I want is victory for the world.”

Experts worry that could lead him to reward the North prematurely with a deal to formally end the decades-long Korean War, something Kim is seeking in the summit.

"There is a lot of fear that Trump might be too excited by this and reaches out for peace treaties before actual verified commitments to denuclearization are in place," Moon says, "and so basically, a peace agreement should be the last reward, not something you give away."

You Have To Lower Your Expectations

Trump once said he would accept nothing less than "complete denuclearization" from North Korea, but after a briefly canceling the summit (and then reinstating it), he has softened his tone an indicated that he sees the summit as a first — not last — diplomatic step.

"[Trump] has learned to adapt in a really interesting way," Catherine Killough, a fellow at the Ploughshares Fund, says. An expert on North Korea's nuclear and missile programs, she's been watching Trump's evolution on the subject and noting how he's gone from an all-or-nothing stance to calling the summit a "get-to-know-you" situation. She thinks that gives the U.S. room to maneuver through negotiations that are likely to be complicated and prolonged. But that reality is far from Trump's initial bravado, when he called for North Korea to completely and immediately denuclearize without any concessions from America.

"This is not how the U.S. usually does diplomacy."

"I think the administration, one, has been really bad at managing expectations as to what is realistic and practical," Jenny Town, a research analyst at the nonpartisan Stimson Center and Managing Editor and producer of "38 North," says. She thinks the U.S. could get a win by coming away with a better idea of where negotiations are headed — not by having the two sides to draft a complicated denuclearization deal under a tight deadline.

"This is not how the U.S. usually does diplomacy," Town says. "Usually you have the working-level meeting beforehand, you have an agreement in place... and that takes the pressure off of the summit to come away with something tangible."

"We were never going to walk away with...an actual nuclear agreement that was at all sustainable or implementable."

She's adamant that a one- or two-day sit-down between the world leaders could never actually lead to a historical arrangement.

"We were never going to walk away with...an actual nuclear agreement that was at all sustainable or implementable," she says.

You Need To Be Prepared

By his own statements, Trump is feeling extremely confident heading into the Singapore Summit.

"I don't think I have to prepare very much," Trump said on Thursday. "It's about attitude." He later said he would know within the first minute whether conversations will go well.

Erica Fein, who works for Win Without War and does advocacy work on North Korea, considers statements like that "part of his schtick."

"I think it works really well with his base, but it doesn't work for America," Fein says. She expects the North Korean side to be "incredibly well prepared" during negotiations with experts in tow who've been working on denuclearization issues for years.

"This is not a situation... where you can just aim for big ideas and a big sell without nitty-gritty, detailed follow-up."

Timelines will be essential to any plan to roll back North Korea's nuclear weapons program, including a detailed framework to permanently end nuclear testing and missile testing by North Korea. As far as denuclearization goes, an agreement would have to be fleshed out by specifying which independent inspectors would gain access to North Korea's nuclear program — the size and scope of which is secret.

"This is not a situation... where you can just aim for big ideas and a big sell without nitty-gritty, detailed follow-up," Moon says.

FYI: Everybody Is Watching You

There's a lot at stake for both Trump and Kim, who are poised to elevate their standing on the world stage if they can take steps toward rolling back the North's nuclear weapons program (Trump's goal) and get relief from U.S. sanctions that have crippled North Korea's economy for years (Kim's goal).

"They're both playing not only to their domestic audiences, but also to the world."

"They're together on the prestige aspect," Killough says. "Trump wants to come way from this meeting as a dealmaker, someone who's made history on an issue where past presidents have failed and for Kim Jong Un, he also wants to be envisioned as a leader of a legitimate nuclear state."

"They're both playing not only to their domestic audiences, but also to the world," she says.

You've Got To Deploy A Charm Offensive

To walk away with a better relationship than they had going into the summit, Trump and Kim will have to genuinely get along with each other, experts say.

"A personal rapport will be absolutely critical," Moon says, noting that both Trump and Kim work best with leaders they personally respect.

Experts say Trump's best opportunity to win Kim over is outside of the formal negotiations: during meals, walks, or one-on-one chats.

"Kim has shown himself to be a very polished diplomatic presence when he needs to be. One big question is how well Donald Trump will be able to sustain that kind of a diplomatic role, because Kim will be putting on his best diplomatic hat for all the world to see."

Experts say Trump's best opportunity to win Kim over is outside of the formal negotiations: during meals, walks, or one-on-one chats.

"For the first time, we're cutting through the North Korean bureaucracy to get to the North Korean leader," Killough says. " President Trump has gotten us to this point where we have a direct line of communication between the president and North Korean leader [and] as much as we don't like to see Kim Jong Un at the so called 'big boy's table,' this is the only way we'll get inside his head."

Remember You Didn't Get Here On Your Own

Trump's effort to strike a deal with a foe comes on the heels of an extremely tense summit with allies. During the G7, Trump challenged world leaders to accept new tariffs, blasted them for their opposition, then left early and refused to sign a customary group statement at the end of the summit.

"There's a lot more pressure on the U.S. than on North Korea to do well in this summit because the U.S. has become the world's worst diplomat," says Moon. "The Trump administration has pulled the U.S. out of so many important agreements that were aimed at cooperation and peace."

"There's a lot more pressure on the U.S. than on North Korea to do well in this summit because the U.S. has become the world's worst diplomat."

Throughout his time in office, Trump has made a priority out of exiting international agreements like the Paris Climate Accord, the Iran Nuclear Deal, and the Trans-Pacific Partnership. He also broke with the international community with his decision to relocate the U.S. Embassy in Israel from Tel Aviv to Jerusalem.

"In order for security guarantees to have any meaning, there has to be a track record over time of trust-building and consistency and sustainability," Town says. "This process by nature cannot be quick because there is no trust here."

"I think the onus is on Trump to show that he can actually be a diplomat and he can actually work cooperatively with a dictator, because he certainly has not been able to do that with allies and friends of democratic countries," Town says.

During discussions with Kim, Trump will have to advocate not only for U.S. interests, but also on behalf of U.S.'s chief ally in the region, South Korea, and other friendly countries in the region.

"This process by nature cannot be quick because there is no trust here."

"There are concerns that Trump may go for what is most threatening to the U.S., the ICMB capacity of North Korea, rather than the much larger arsenal of short-range and mid-range missiles that would target Japan, South Korea, and the regional partners in Asia," Moon says.

For South Korean leader Moon Jae In, whose efforts brokered the historic meeting between Trump and Kim, much is at stake.

"He's really been the sort of behind-the-scenes maverick that is working his magic to make this happen and that's because he has a mandate for peace in the Korean Peninsula," says Erica Fein of Win Without War.

You Should Keep Bolton Out Of The Room

National Security Advisor John Bolton is accompanying Trump to Singapore, but it's unclear what role he'll have during the summit. Experts warn that Bolton — who has a history of working with the North Koreans as a member of past administrations, and who has encouraged Trump to follow the "Libya model" for denuclearization (which resulted in the ouster of that country's leader, and which North Koreans are anxious not to repeat) — could be toxic to any negotiations.

"If he gets the last word with the President before he goes into the summit, I think that could create a lot of chaos," Fein says. "He clearly for his entire career has been a neocon hawk that supports American unilateralism and he doesn't want to see any type of concessions being made, whether real or perceived."

This Is A Good Time To Keep Your Mouth Shut

Town says a main reason why, typically, negotiations are done in advance, over time, and behind closed doors is to manage public expectations.

She says that while both leaders revel in the spotlight and are bound to enjoy the attention they'll get during the summit, it would be a mistake to broadcast how negotiations are going.

"You want that room to be able to whether the ups and downs and to get your feelings hurt once in a while and to bounce back and to move through the process," she says. "It's much harder when there's scrutiny on every word that is being said."