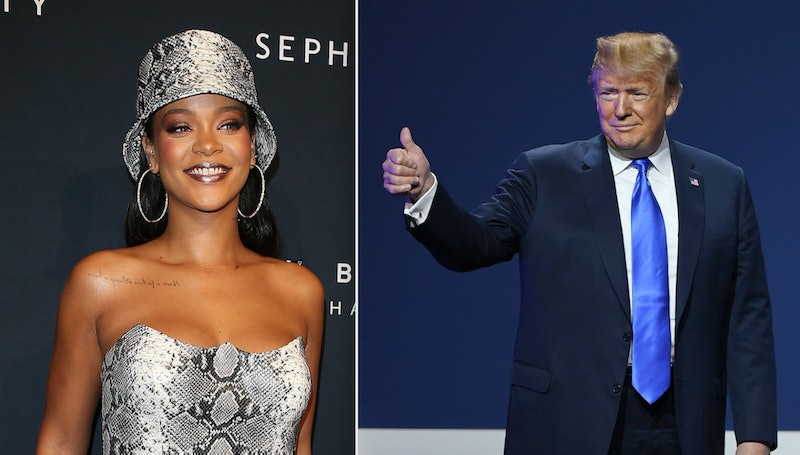 President Donald Trump is well-known for using Twitter to convey his thoughts on people, politics, and everything in between. However, while the president frequently tweets and retweets on the social network, he very rarely "favorites" other people's tweets. Notably, that changed this week when Trump liked a tweet about Rihanna and the pop star's penchant for work-life balance. This tweet is the first one the president has liked in nearly two years.

The president's newly favorited tweet came from writer Heben Nigatu. On June 10, Nigatu shared an excerpt of an interview with Rihanna in Interview Magazine that particularly stood out to her — one that focused on how the singer says she's begun to prioritize self-care in her own life. In commenting on the excerpt, Nigatu wrote, "Every new Rihanna interview makes me grow stronger. We stan a work/life balance queen!!!"

The Rihanna interview excerpt may have struck a chord with Trump as well, who favorited the tweet earlier this week. According to his account metrics, Trump has only favorited eight total tweets since his account was created in March 2009. The president last favorited a tweet in June 2017 that read, "please, after several typo's, he's just not Presidential material." Notably, that tweet appeared to be mocking a typo the president had made in a previous tweet of his own.

Following his like of Nigatu's tweet, many on Twitter have likely been left wondering which portion of the Rihanna interview excerpt shared by the writer resonated with the president the most. The excerpt contains a lengthy refection from the singer on her personal time, reading, in part:

... It’s only the last couple years that I started to realize that you need to make time for yourself, because your mental health depends on it. If you’re not happy, you’re not going to be happy even doing things that you love doing. It’d feel like a chore. I never want work to feel like a chore ... I’ll shut things down for two days, three days at a time. On my calendar we now have the infamous 'P,' which means personal days. This is a new thing.

Trump's apparent support for Rihanna's working philosophy doesn't constitute the first time the singer and the president have been linked in some way on Twitter.

Back in November 2018, the pop star commented on tweet from a Washington Post reporter, Philip Rucker, who was covering a Trump rally and noted that one of Rihanna's songs was playing at the event.

In her own tweet late last year, Rihanna indicated that she was not thrilled about the notion of her music being featured at Trump-affiliated gatherings — and warned that she was going to do something about it. "Not for much longer ... me nor my people would ever be at or around one of those tragic rallies, so thanks for the heads up philip!" Soon after this Twitter interaction, Rihanna's legal team sent a cease-and-desist letter to the White House counsel demanding the president stop using her music at his rallies, Rolling Stone reported.

The pop star hasn't commented publicly on Trump's "liking" of her interview material. For the much-talked-about tweet's author, Nigatu, the president's Twitter activity appears to be confounding, to say the least. "WHAT IS HAPPENING" she wrote on Wednesday, while commenting on a screenshot of Trump's list of favorite tweets.