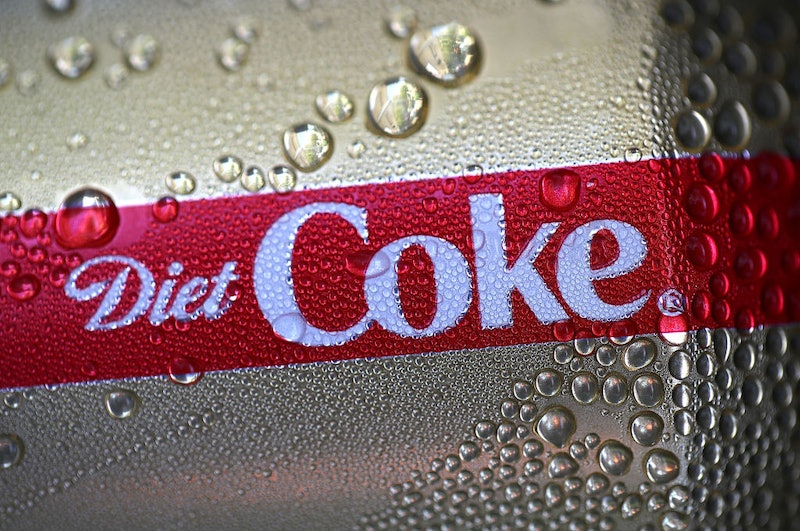 During a recent interview with reporters from TIME magazine in the Oval Office, President Trump pushed a "Diet Coke button" on his desk, resulting in the rapid delivery of the beverage to his presidential workspace. This latest interview anecdote serves as a reminder of the president's strong affinity for diet cola — and the lengths he has taken to ensure that he has access to it at all times.

Reporter Brian Bennett described the ease with which Trump secured the drink during his recent interview with the president. "He has invited a group of TIME journalists for an interview," Bennet wrote. "Along the way, he orders a Diet Coke with ice with the push of a small red button set into a wooden box on the desk, and directs an aide to fetch a copy of a hand-delivered birthday letter sent from Kim Jong Un."

This isn't the first time the media has referenced Trump's Diet Coke-acquiring button. In 2017, Financial Times reporter Demetri Sevastopulo indicated that he, too, had noticed "a little red button on a box that sits on his [Trump's] desk." Sevastopulo indicated that he joked with the president and asked him if it was the nuclear button. In response, Trump noted, “No no, everyone thinks it is. ... Everyone does get a little nervous when I press that button." Sevastopulo similarly reported that Trump pushed the button during his interview and a Diet Coke appeared shortly afterward.

Moreover, in 2017, AP reporter Julie Pace also referenced the red button, writing that "a White House butler soon arrived with a Coke" after Trump pushed the device during their interview about his first 100 days in office.

Diet Coke has appeared alongside Trump during many significant occasions. For example, in an Instagram post shortly after he secured enough delegates to receive the Republican nomination for president, Trump is pictured with a celebratory meal that features a burger and fries alongside a Diet Coke. More recently, in September 2018, Trump toasted the United Nations General Assembly with a wine glass full of Diet Coke, Mashable reported.

According to a December 2017 New York Times article, Trump reportedly drinks around 12 Diet Cokes per day, so the fact that the beverage often appears alongside him at events is unsurprising. However, what is perhaps surprising is that Trump has previously disparaged Diet Coke on Twitter, despite his affinity for it.

For example, in 2012, Trump released a string of tweets seemingly criticizing the beverage. "I have never seen a thin person drinking Diet Coke," he wrote on Oct. 14. On Oct 16, he followed up with, "The more Diet Coke, Diet Pepsi, etc you drink, the more weight you gain?" That same day, he also tweeted, "The Coca Cola company is not happy with me--that's okay, I'll still keep drinking that garbage."

Overall, Trump certainly appears to have a strong affinity for Diet Coke, despite some apparent misgivings about drinking it in the past. It seems to be a safe bet that the Diet Coke button will remain in place in the Oval Office through the remainder of Trump's presidency.