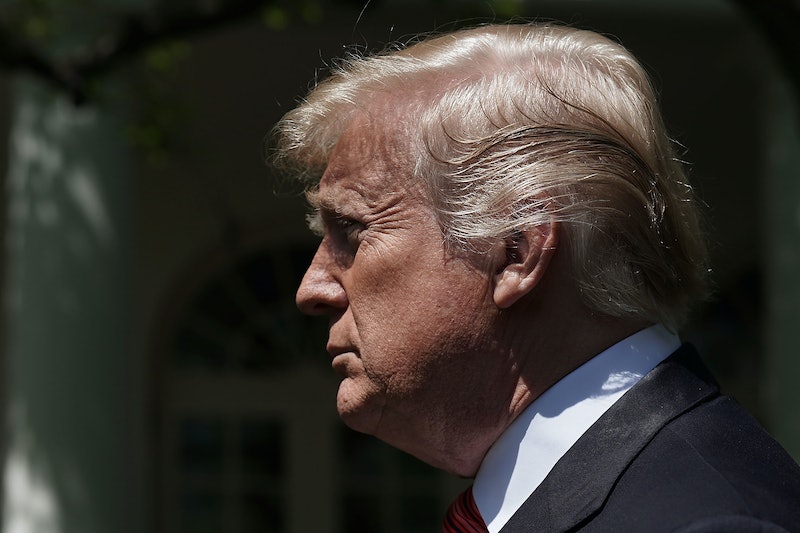 One of Donald Trump's key campaign promises was to defund Planned Parenthood, one of the country's biggest reproductive health care providers in the country. Over a year into his presidency, many Republicans and other abortion opponents are demanding that he make good on his commitment, though their suggestion could have a series of other grave consequences. According to multiple news outlets, President Trump may slash Planned Parenthood funding by changing Title X eligibility requirements, making it harder for the most vulnerable populations to receive care.

"This would be a radical departure from the way that health care has operated in the United States up until this point," Erica Sackin, director of political communications at Planned Parenthood, tells Bustle.

What Trump is reportedly considering is often referred to as a domestic gag rule, and according to Axios, he's considering implementing it by executive order. A gag rule would make any health care provider who provides abortion services, or information about abortion services, ineligible for Title X funding, and explicitly prohibit those providers from so-much as discussing abortion with their patients. Bustle has reached out to the White House for comment.

Title X funding is a grant program specifically earmarked for covering access to things like birth control, cancer screenings, and STD screenings. It is primarily intended to service low-income or uninsured people, and it has been around since 1970.

Currently, the program services about 4 million people, and just over 40 percent of these recipients receive care at Planned Parenthood, even though the organization is only a small fraction of the health care centers who receive Title X funding. Whether or not a domestic gag rule would have the Trump administration's intended effect on Planned Parenthood isn't entirely clear. Sackin tells Bustle that the nonprofit has no intention of giving up the fight, including in the face of a potential executive order.

However, the potential executive order could cause serious damage to hospitals and other, smaller clinics, and could force separate health care providers to shoulder the burden of caring for patients that other clinics would no longer be able to afford servicing. While critics say a domestic gag rule is understood to intend undercutting Planned Parenthood, almost 75 percent their public funding actually comes from Medicaid reimbursements — not Title X.

Even so, Title X supports some of the most vulnerable populations in the United Sates. According to the Guttmacher Institute, two-thirds of the people who receive care under Title X funding are at or below the federal poverty level. Additionally, the institute reports, about six in 10 women who use federal dollars to access contraception do so through Title X supported providers.

Modern Healthcare reported in April that Trump would be considering a domestic gag rule sometime in May, and its supporters are not letting the idea go to the wayside. On Tuesday, more than 85 lawmakers and anti-abortion groups signed a letter demanding that the president restrict abortion-providing centers from receiving Title X funds.

"The result of this policy is simply to separate the Title X network of family planning providers from abortionists like Planned Parenthood — the nation’s largest abortion chain," the letter reads. The letter's signatories said they intended to "disentangle abortion centers from the Title X network." Kellyanne Conway is also reportedly personally lobbying Trump for the change, Axios reports.

Dawn Laguens, Executive Vice President of Planned Parenthood Federation of America, said in a statement that such a gag order would severely restrict the information that health care providers are allowed to share with their patients. "It would prohibit any health care provider from sharing information about, or even mentioning the word abortion if they serve Title X patients," she said. "This would have devastating consequences, and essentially dismantle the nation’s program for affordable birth control and reproductive health care, which 4 million people rely on."

More like this
'The Capture' Is Finally Back – & S2 Looks Tense AF
By Sophie McEvoy and El Hunt
The Lionesses Are Calling For Equal Access To Football In Schools
By Sophie McEvoy
50 Books To Read With Your Book Club
By K.W. Colyard
Amazon Is Selling Out Of These Products Under $35 That Make Your Home Look So Much More Expensive
By Mackenzie Edwards
Get Even More From Bustle — Sign Up For The Newsletter